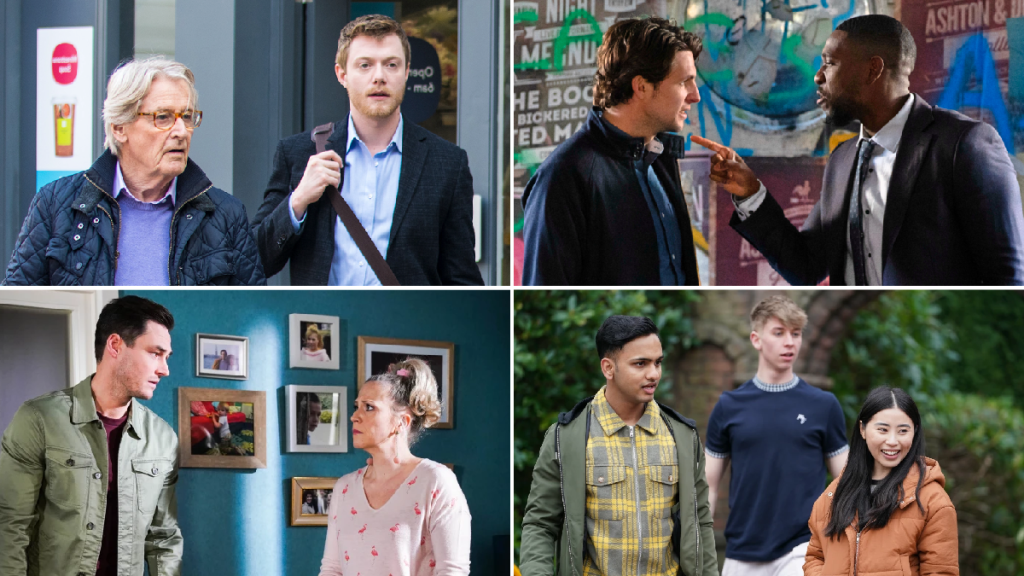 Many a soap mainstay has to make a big decision next week, with dramatic events ensuing as a result.

EastEnders’ Linda Carter is offered money by Janine Butcher to leave the Square immediately, but will she do so?

Imran Maalik, meanwhile, goes on a date with Serena Chen-Williams in Hollyoaks, but he decides to invite along his friends, which confuses matters for Serena.

Over in Coronation Street, Ken Barlow is accused of betraying Tracy Barlow after he’s spotted out with Daniel Osbourne, while Emmerdale’s Ethan Anderson is attacked by racist Jordan.

There’s a lot to unpack, that’s for sure, so make yourself a brew and enjoy a deep-dive into next week’s soapy shenanigans, courtesy of Metro.co.uk.

1. As Imran, Toyah, Kelly, Nick, Leanne and Adam gather for Alfie’s naming ceremony, Abi arrives! Abi grabs the opportunity to take some pictures of her son, and secretly meets up with Matty, an old contact. She hands him a couple of envelopes, orders him to work his magic. Toyah, meanwhile, lets Abi take Alfie for a walk, which horrifies Imran.

2. Tim buys some tickets for the charity raffle in memory of Oliver, and he wins a romantic night for two in her hotel. Sally packs for the evening, while Tim orders some erectile dysfunction tablets, ignoring the warning about heart conditions. At the hotel, Tim and Sally kiss passionately, but things soon take a turn when Tim’s heart starts to pound. He subsequently confesses to Sally that he’s taken an erectile dysfunction tablet, and collapses on the bed. Horrified, Sally calls an ambulance.

3. Daniel tells Mrs Crawshaw that he doesn’t think he’s cut out for teaching, and later, he reveals that he’s decided to quit teaching. In the flat, Daniel tells Nicky about how he doesn’t deserve to be a teacher. When Nicky suggests they could have a future together, how will Daniel react?

4. Fiz meets up with Phill and his friends, Graham and Angela. Graham recognises Fiz from her trial and explains that he was the solicitor for the prosecution. Fiz confides in Tyrone how she’s never told Phill about her crazy ex-husband in case he ran a mile – what will Phill think?

5. Tracy and Amy are shocked to see Ken and Daniel sharing a laugh together. Tracy rails at Daniel and threatens to report him to Mrs Crawshaw. Tracy calls at the barber’s in a bid to recruit David on her mission to sabotage Daniel’s job, what will David decide?

6. Amy and Jacob worry about their broken boiler and where they’re going to get a shower. Mary realises she’s left Tracy’s order book at home so Jacob offers to pick it up for her. Eileen returns home and she’s shocked to find Jacob wearing only a towel having just had a shower. As Eileen screams and threatens to call the …read more