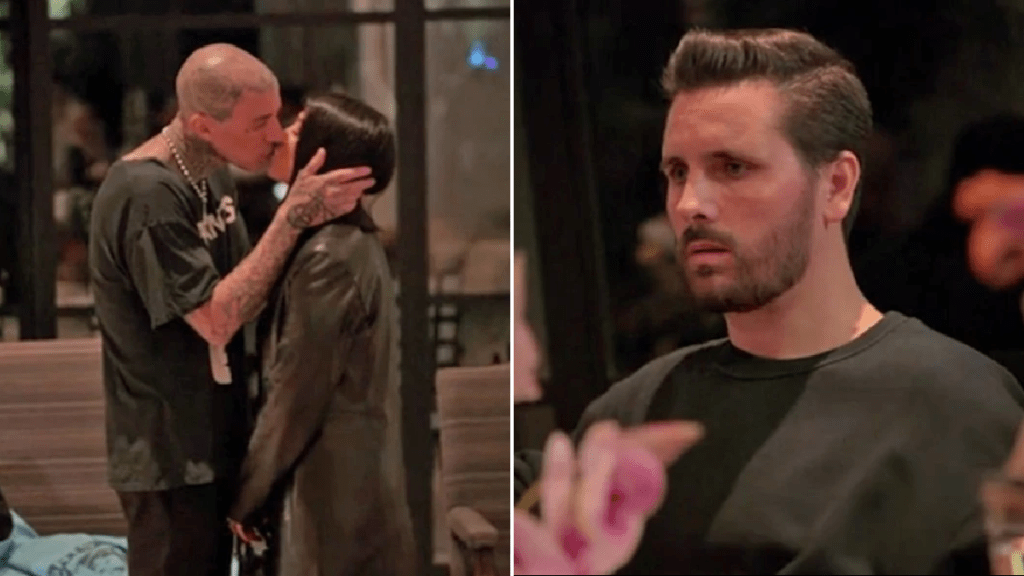 We feel you, Scott (Picture: ITV)

Seeing your ex make out with their new partner is never fun, and Scott Disick’s face is a picture as he’s forced to witness his ex-girlfriend Kourtney Kardashian snog Travis Barker in the latest episode of The Kardashians.

Scott has been somewhat sidelined in the new Hulu series, but he finally got to congratulate Kourtney and her new relationship over an intimate family meal for Kris Jenner’s birthday.

Little did he know that he’d soon be watching the happy couple make out and feed each other at the dinner table.

Shortly after the businessman gives Travis a handshake and a hug, Ellen DeGeneres pointed out the singer piling on the PDA just a few metres away.

‘Scott’s right there!’ Kris whispered, as she got a glimpse of Kourtney and Travis locking lips. ‘Oh, this couldn’t be more awkward!’

And yep, Kris was right, as the camera panned to show Scott looking super uncomfortable.

‘I know we were holding back,’ Kourtney admitted in the confessional. ‘That I do know. We weren’t like just fully going for it.

‘I didn’t know that anyone was looking at us.’

Kris then invited Scott to sit down at the table next to her daughter Khloe, however he was then forced to witness Kourtney feed her now fiancé, who were both sat opposite him.

Speaking in the confessional, Scott insisted he was happy for his ex for finding someone.

Kourtney said that she and Travis were ‘holding back’ in front of the group (Picture: Hulu)
Scott insisted that he’s happy for his ex (Picture: Hulu)

‘I’m happy for her,’ he said. ‘She’s got a man who loves her, and she deserves it, because there were so many years where I didn’t put her first.’

Scott and Kourtney were together on and off between 2005 and 2016 with the ups and downs often featured on Keeping Up With The Kardashians. They share three children together, Mason, Penelope and Reign Disick.

Kourtney, 42, and Blink-182 drummer Travis, 46, have reportedly been together since December 2020, but only went public with their romance after three months.

More: Keeping Up With The Kardashians

What time does The Kardashians new show come to Disney Plus?

Travis proposed to The Kardashians star while enjoying a getaway in Santa Barbara in October 2021.

More recently, they were ‘married’ by an Elvis impersonator at the One Love Chapel in Las Vegas after the Grammys, with Kourtney telling her millions of Instagram followers the wedding had taken place ‘with no licence’.

The Kardashians airs on Disney Plus in the UK.

If you’ve got a celebrity story, video or pictures get in touch with the Metro.co.uk entertainment team by emailing us celebtips@metro.co.uk, calling 020 3615 …read more