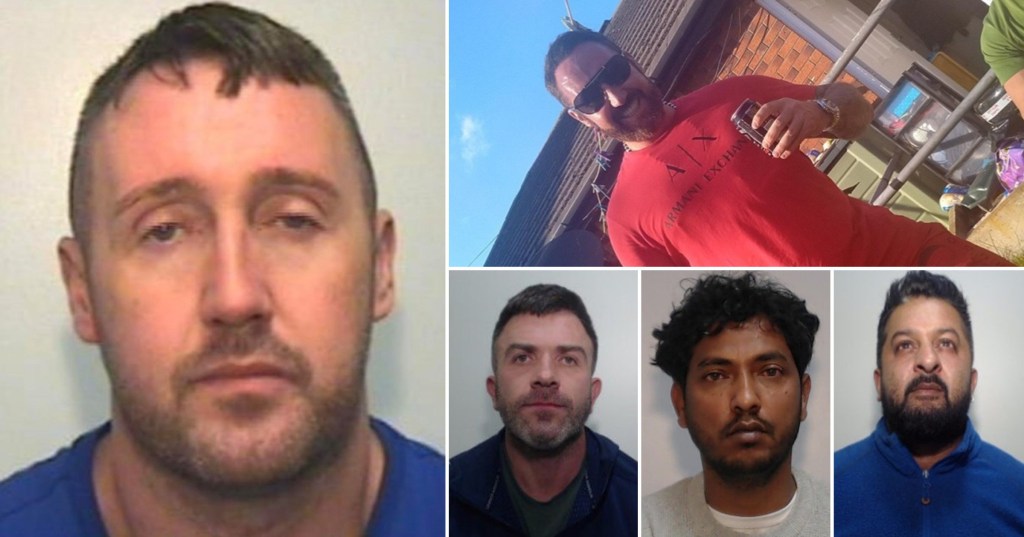 A drug kingpin who ran a £9 million operation has been jailed after police recovered a photo of him that he’d sent to other gangsters while enjoying a beer in the sun.

Leon Atkinson, 41, leader of the cocaine ring, unwittingly allowed police to smash the underground enterprise when he shared the smiling selfie in an encrypted chat.

Detectives had originally trawled through thousands of messages sent by the group on EncroChat, without a breakthrough.

But when Atkinson posted his grinning photo from his garden during the summer of 2020, officers were able to establish the names of five other gang members.

Greater Manchester police (GMP) said: ‘We recovered an image of Atkinson drinking beer in his garden during the Covid lockdown.

‘[It] was sent from his device to a leading member of another drugs gang, which prompted confirmation that he was behind the nicknames Carrothorn/Maidenbear and thus heading the drug conspiracy.’

Abdul Ghafar, 46, was involved in transferring four kilograms of cocaine and at least £6.5 million in cash.

Atkinson posted this grinning photo from his garden during the summer of 2020 (Picture: SWNS/ Greater Manchester Police)
Atkinson revealed himself by putting his picture in the otherwise-encrypted chat (Picture: Universal News And Sport Scotland)

Distributors Adam Marsden, 37, and Nathan Powell, 31, sourced and supplied more than 40kg of class-A drugs between them.

Romiz Ahmed, 39, was convicted of laundering at least £1.9 million in cash in the three-month window when police collected evidence.

Four of the five men captured during raids were given sentences totalling almost 40 years on Monday and Tuesday.

They received jail terms between eight and 15 years when they were brought before a judge at Manchester Crown Court.

Ahmed was also jailed for six years after being found guilty of conspiracy to transfer criminal property and being concerned in an arrangement which facilitates the acquisition, retention, use or control of criminal property.

The crackdown was part of Operation Venetic, which has targeted criminals using the EncroChat messenger and is the UK’s biggest ever law enforcement operation.

So far in Greater Manchester, more than £2.5 million in cash has been seized, as well as nearly a dozen firearms and at least 1,100 rounds of ammunition.

Four of the five men captured during raids were given sentences totalling almost 40 years on Monday and Tuesday (Picture: Greater Manchester Police/SWNS)

Police confirmed 12kg of Class A and 25kg of Class B drugs, and more than £300,000 of assets including luxury jewellery and vehicles had also been taken off the street.

Well over 200 people have been detained by GMP since the launch of Operation Venetic by the National Crime Agency in July 2020.

Stock Market: Suez Canal Update! Floating!
Eurovision 2022: How do you vote and how much does it cost?