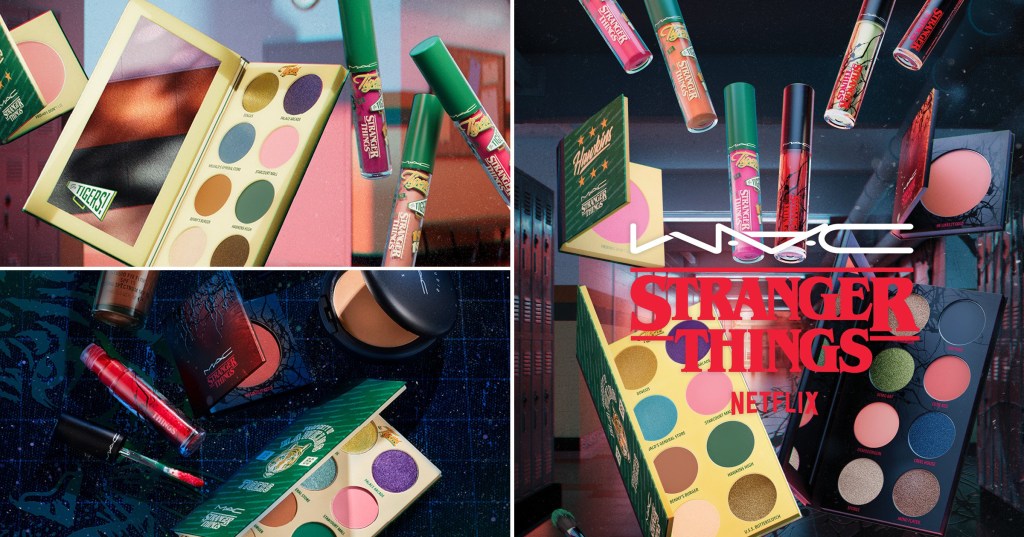 Something is coming… (Picture: MAC Cosmetics)

The mother of all makeup collaborations is about to drop, as MAC Cosmetics have partnered with Netflix for a Stranger Things collection in the wake of the upcoming series.

From May 16, a limited edition range of eyeshadows, blushers, lip glosses and brushes will hit stores and MAC’s website.

For the filming of the upcoming series, MAC products were used on the actors and this collection creatively captures the creepy feel of the show.

‘Coming of age in a small town in the 80s, I completely relate to the vibe and characters of Stranger Things,’ said Fatima Thomas, a senior makeup artist at the brand.

‘This collaboration perfectly captures the essence of the era: spirited, adventurous and fun.’

The range is split into two halves, to represent Hawkins and the Upside Down.

Hawkins products are colourful, playful and innocent, just like the children were before they met with the Upside Down.

There’s a neutral pink gloss and 80s blue eyeshadow in that half of the range, while Upside Down products are deeper – from a yellow gloss to shadowy eye colours.

The great thing about this dual collection is the range will suit a variety of skin tones.

Though there are only two blush shades, the difference between them is considerable – one is a pale pink, while the other is a deep reddish tone.

We found you only needed a light hand when applying the blushers – they packed a punch and could easily be built up.

It’s worth noting that the deeper shade, He Likes It Cold, is much redder in real life and darker than it looks in the promotional imagery – you can see in our video below.

I got press samples of the new @maccosmetics X Stranger Things collaboration – it launches on the 16th! There are two halves to the products – the darker and bolder “Upside Down” world and the more vibrant and playful “regular Hawkins”. Good shade variety to suit a mix of skin tones and fun packaging. I’ve even been converted to yellow lip gloss! #macxstrangerthings #makeup #strangerthings #maccosmetics #beauty #swatches

Compared to the usual MAC formula, they were that bit more pigmented.

The same goes for the MAC shadows – sometimes MAC’s usual formula can be a little on the dry side, but not with this palette.

The shades worked well with fingers and a brush, and could be layered. We think the Upside Down palette will …read more