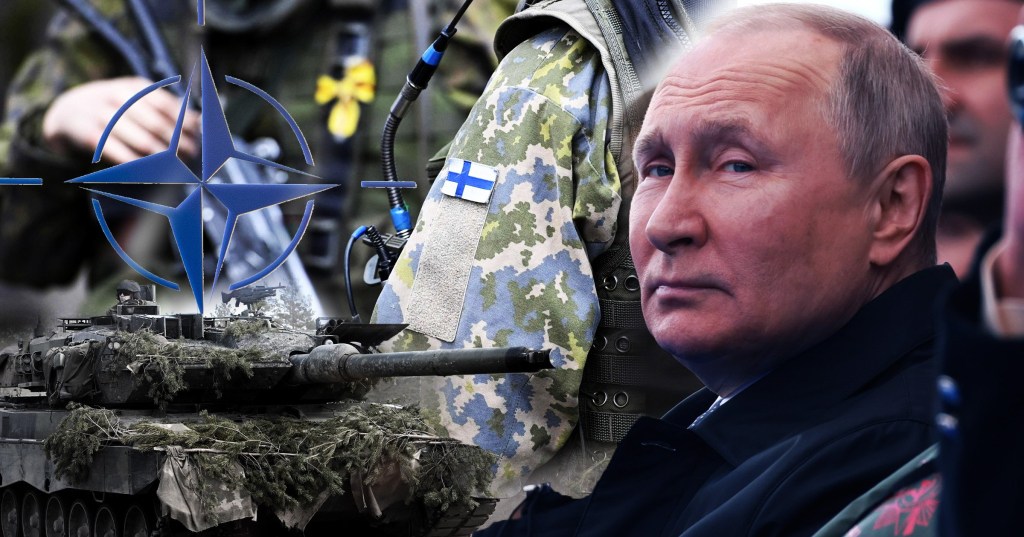 A new 1,584-mile front will be opened along Nato’s eastern border with Russia if Finland joins the alliance as anticipated (Picture: Rex/AFP/AP)

A ‘grey zone’ war is predicted to play out along a vast stretch of Nato’s expanded border with Russia as Finland embarks on a path to joining the military alliance.

The Nordic country will immediately become a key member nation at the forefront of a strategically realigned Europe, a defence expert said.

Benedict Wilkinson, deputy director for defence at research organisation RAND Europe, spoke after Finland’s president and prime minister said an application would be submitted within days.

The move follows the Russian invasion of Ukraine and the Kremlin’s wider hostile activities across Europe, and is expected to be followed by a similar application from Sweden.

Mr Wilkinson, who appeared before the House of Lords International Relations and Defence Committee this week, said: ‘Once it’s ratified Finland, quite uniquely in the history of Nato, will immediately become one of the most important member nations.

‘The new member will bring a border spanning roughly 1,350 kilometres with Russia and a very large army with a key role to play.

‘It will suddenly become an incredibly powerful player in Nato. There is a question here for Nato about how it absorbs and helps Finland as it leaps to the top of the priority list.’

The prospect of Finland and Nordic neighbour Sweden joining Nato, a process which could take up to a year, has drawn continued belligerent rhetoric from Moscow.

Kremlin spokesman Dmitry Peskov said today that Helsinki’s announcement was ‘definitely’ a threat and would be met with a response.

Asked what form this would take, he replied: ‘Everything will depend on how this expansion process of Nato expansion plays out, the extent to which military infrastructure moves closer to our borders.’

Finnish soldiers during an exercise in the west of the country (Picture: Heikki Saukkomaa/Lehtikuva / AFP via Getty)

The European countries were militarily neutral during the Cold War but became partners with the alliance – meaning they receive briefings but do not take part in military exercises – on joining the EU in 1995.

In April, a former British Army officer told Metro.co.uk that Putin’s ‘military gangsterism’ was pushing the Baltic nations towards the security pact.

Mr Wilkinson testified before the Lords this week on the UK’s defence strategy and capabilities, taking in the Russian invasion of Ukraine which has drastically changed the strategic landscape across Europe.

‘There will be a rocky period between Finland’s announcement of the intention to join and actually joining,’ he said.

Stock Market: Suez Canal Update! Floating!
Awkward joke about Rebekah Vardy’s vagina gets belly laughs on Have I Got News For You after Peter Andre ‘chipolata’ dig