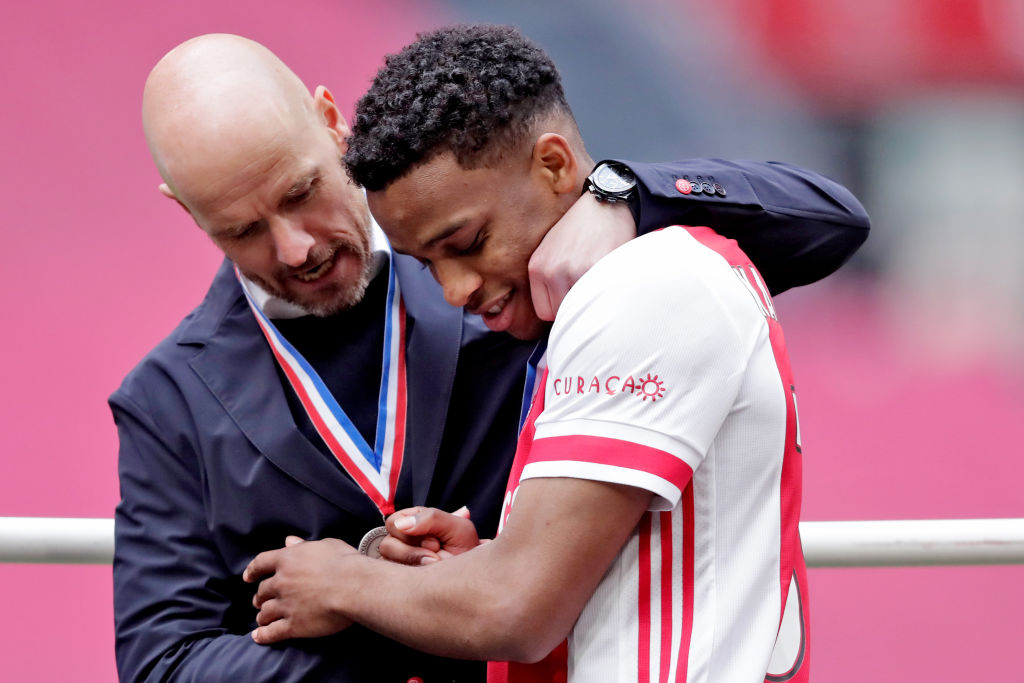 Timber has thrived under ten Hag at Ajax (Picture: Getty)

Erik ten Hag says the decision to name Manchester United target Jurrien Timber Ajax’s Talent of the Year was a ‘no brainer’.

Ajax sealed the Eredivisie title on Wednesday night with a 5-0 win over Heerenveen as ten Hag signed off in perfect fashion ahead of his move to Old Trafford.

Timber has played a key role under the Dutchman this season, making 42 appearances at the heart of defence.

Since 1994, the Dutch giants have awarded a Talent of the Year prize, named after legendary striker Marco van Basten, to their most impressive youngster.

The winner of the award is decided by the club’s technical staff with the call to hand the award to Timber described as a ‘no brainer’ by the now departing Ajax boss, according to Voetbal International.

Timber is one of a clutch of Ajax stars to have been linked with a move to United this summer.

Defence has been an area of concern for United this season where Harry Maguire and Raphael Varane have both struggled with reports suggesting ten Hag is eager to bring in his own option at the back.

Ten Hag gave Timber is senior debut in 2020 and has been a mainstay in the Ajax side ever since.

Responding to the rumours, Netherlands international Timber told Het Parool in April: ‘I’m good at Ajax. I can still learn a lot, especially if we continue to play in the Champions League.’

On Ten Hag, the talented defender added: ‘He deserved it [the United job]. Ten Hag has been very important to me personally.

‘Under him I became the footballer, the man I am today. The coach talked to me a lot. He’s been very critical, in a good, constructive way. I won’t forget that anytime soon.’

Road resurfaced around BMW after driver failed to move their car