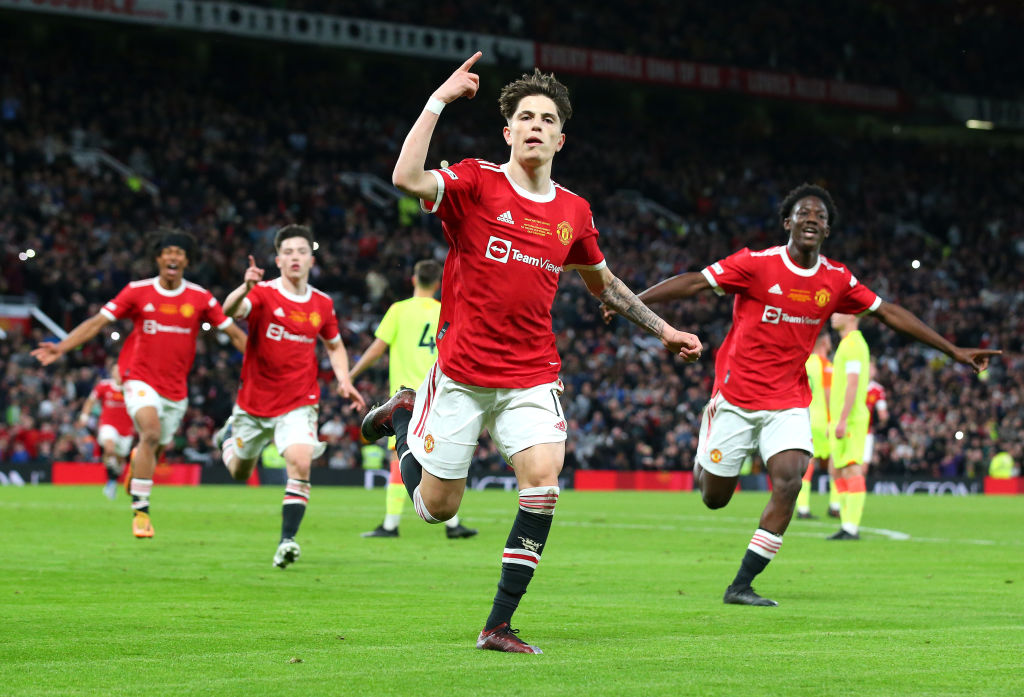 Alejandro Garnacho was the star of the show in the FA Youth Cup final (Picture: Getty)

The Red Devils won this year’s Youth Cup at Old Trafford for a record 11th time after a 3-1 victory over Nottingham Forest on Wednesday night.

A record crowd of over 66,000 attended the match, with a number of high-profile names including Sir Alex Ferguson and Sam Allardyce watching on from the stands.

One of the highlights of the game came on 78 minutes when Garnacho scored a penalty to put United back into the lead before running off and mimicking Ronaldo’s SIU celebration.

Ronaldo’s celebration has followed him throughout his career at Real Madrid and Juventus and has become synonymous with his CR7 brand.

Although United won the Youth Cup comfortably in the end, Garnacho’s penalty was much needed with the sides still deadlocked 12 minutes before the end.

Alejandro Garnacho scores from the spot and pulls out the SIU celebration ð¥ pic.twitter.com/hs8uBTMkOe

In the first-half, Rhys Bennett had scored United’s first goal which was cancelled out by Forest youngster Joshua Powell’s long-range effort just before the break.

However, it was Argentinian Garnacho who turned out to be the star of the show as he went on to score United’s third with the help of a deflection and was clapped off the pitch by the home faithful including legendary boss Ferguson.

The Red Devils’ victory in the Youth Cup is their first since a side including Paul Pogba lifted the trophy in 2011.

MORE : David Beckham sends message to Cristiano Ronaldo over his future and reacts to Manchester United’s woeful end to the season