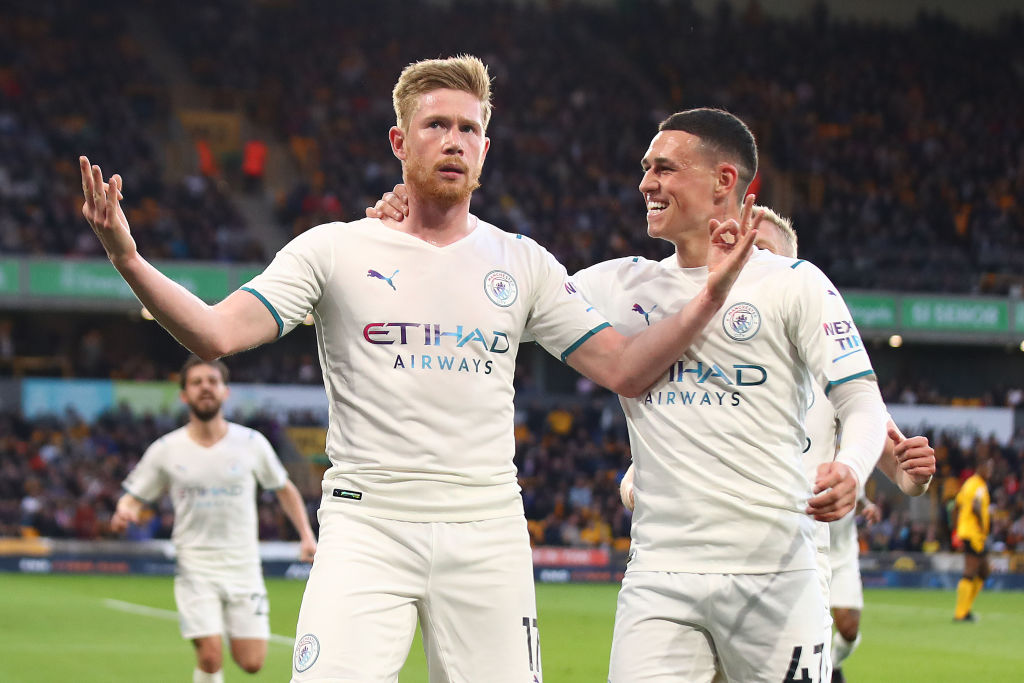 Kevin De Bruyne produced a nod to his soon-to-be teammate Erling Haaland, by copying his goal celebration when he completed a superb hat-trick for Manchester City against Wolves on Wednesday night.

The Belgian scored his first of the night seven minutes into the game and had netted his by the 24th minute in an immense display of finishing from the midfielder.

Haaland is set to join City in the summer from Borussia Dortmund, with the Premier League champions confirming the deal on Tuesday.

Obviously the news did not go over the head of De Bruyne and the midfield maestro let his incoming teammate know that he is thinking of him.

After lashing his third into the back of the net, De Bruyne ran off to celebrate and put his thumbs and forefingers together to mimic Haaland’s famous ‘meditation’ goal celebration.

De Bruyne will undoubtedly be providing plenty of assists for Haaland next season (Picture: Getty Images)

Kevin De Bruyne completes his first-half hat-trick with a ROCKET of a left-foot strike! ð pic.twitter.com/O7Ng9Sy9oP

De Bruyne did not go full Haaland and sit down on the pitch in the lotus pose, but produced enough of the celebration to act as a nod and a wink to the Norwegian.

Asked by Esporte Interativo why he has celebrated that way in the past, Haaland said: ‘I really enjoy meditation. It makes feel calm and gives me tranquillity. This is why I sometimes celebrate like that when I score.’

Erling Haaland has used the celebration before for Dortmund and RB Salzburg (Picture: Getty Images)

Haaland does not celebrate with the meditation every time he scores, but has performed it at times for both RB Salzburg and current side Borussia Dortmund.

It seems certain that he will have plenty of opportunity to do it again when he arrives in the Premier League and links up with De Bruyne and the rest of Manchester City’s superstars.