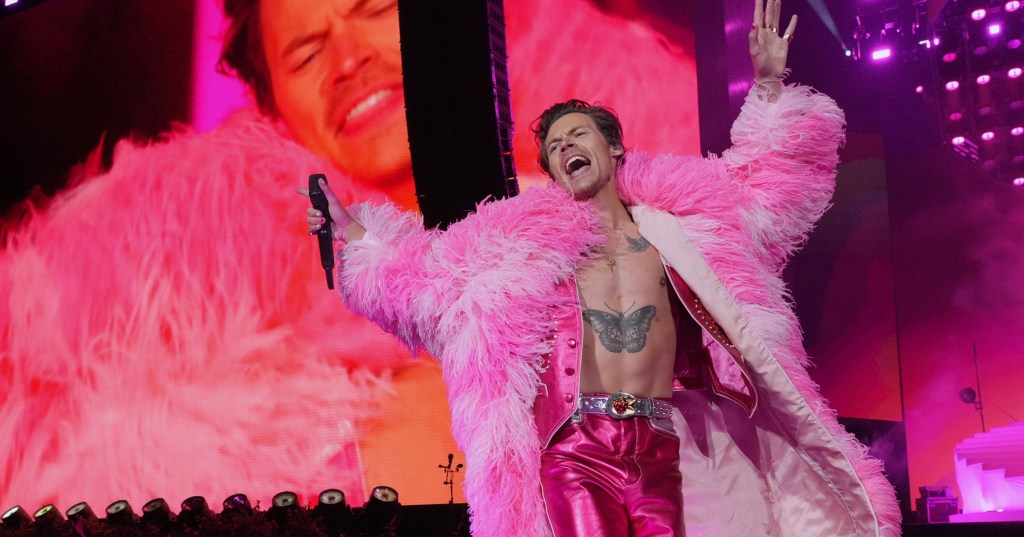 Harry Styles is bringing a special One Night Only gig to London, but tickets are like gold dust (Picture: Getty )

Harry Styles fans have been left devastated as tickets for one of the singer’s upcoming gigs are selling for £1500.

The former One Direction star, 28, is celebrating the release of his new album, Harry’s House, with lead single As It Was skyrocketing to the top of the charts.

As part of the celebration, the musician announced a special One Night Only gig in London’s Brixton Academy, and, as expected, tickets were in high demand.

So high, in fact, that they sold out almost immediately following presale on May 10 and general sale on May 11.

And in a hugely frustrating twist, tickets began popping up on resale site Viagogo the very same day.

Tickets from the show are now being sold on to desperate fans, with most costing around £400 and some reaching up to a shocking £1500.

Harry’s solo career continues to skyrocket since One Direction took a hiatus a long, long time ago (Picture: Getty Images)

The most expensive are for the circle section of the Academy gig, with an asking price of an eye-watering £1503, with the second-most expensive being £1053, followed by £848.

Even the least expensive tickets are completely unaffordable to most, with the cheapest having an asking price of £394, followed by £404 and £411.

Harry fans are raging at the injustice, with some insisting the tickets were bought by bots to allow touts to resell them and make massive profits.

One furious fan took to Twitter where they shared photographs of tickets up for resale and told Ticketmaster there was ‘fat chance as usual of genuine fans getting @Harry_Styles Brixton Academy tickets.’

They added they were ‘all snapped up by bots and now on re-selling sites.’

Another disappointed fan called for anyone who was selling a ticket ‘that isn’t over 3 times the original price’ to let her know.

‘Who actually got a Harry Styles ONO Brixton ticket because all the tickets seem to be fone but I don’t see anyone who got one,’ another fan wrote.

@Ticketmaster fat chance as usual of genuine fans getting @Harry_Styles Brixton Academy tickets – all snapped up by bots and now on re-selling sites ð¤¬ð­ pic.twitter.com/EiQHzJOneX

Who actually got a Harry Styles ONO Brixton ticket because all the tickets seem to be gone but I don’t see anyone who got one pic.twitter.com/3kxvs6VwP1

Ticketmaster is advising fans that as Viagogo is an unofficial seller they are not associated with, they ‘cannot be confirmed as real or valid tickets,’ however the company has not made any suggestion …read more

Stock Market: Suez Canal Update! Floating!
A stunning Grecian villa with its own outdoor cinema is up for sale at £2.1million

Deuces are wild in the latest baseball quiz

Nightmarish child robot that has seizures and bleeds could save lives