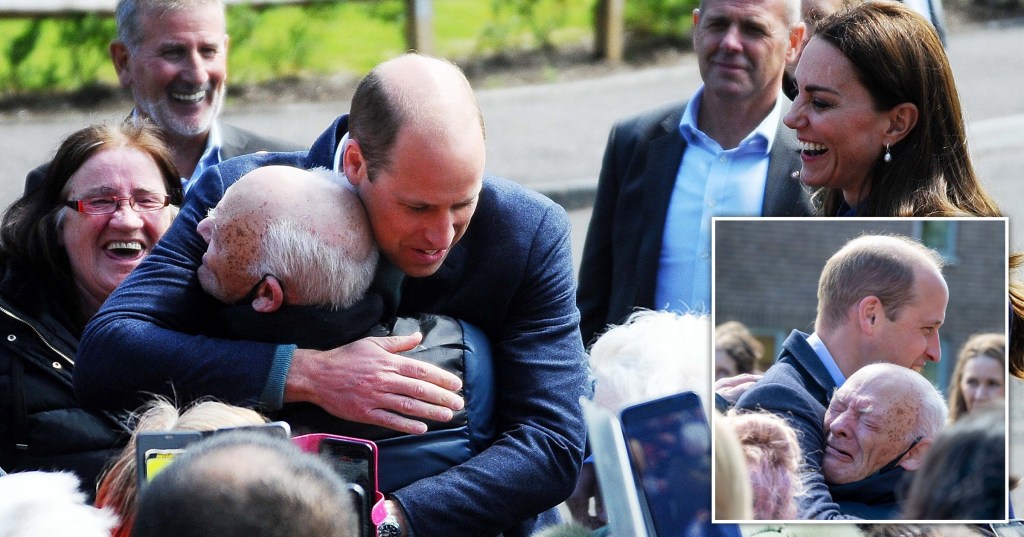 Glasgow locals were overjoyed to meet the Duke and Duchess of Cambridge (Picture: PA/Backgrid)

This is the moment Prince William warmly embraces a man who is overwhelmed with emotion during a trip with Kate Middleton to Glasgow.

The couple met vulnerable people, including those at risk of homelessness receiving help from Scotland’s leading housing management group.

William and Kate surprised the Wheatley Group’s tenants during a walkabout through Kennishead, in the south side of the city.

Mum-of-four Joanne Wales, 31, opened the front door of her new-build home to welcome the future King and Queen.

Inside they met son Jason, four, who showed the royal couple his Spider-Man and Hulk toys. Kate told him: ‘Louis our little boy loves Spider-Man too.’

Joanne, who has been a single parent since her partner died nearly two years ago, said the couple were ‘absolutely lovely’.

She added: ‘It was not as weird as I had thought it would be because they just put you at ease, they are so nice and welcoming.

‘They just wanted to make sure that I was doing okay and that I look after myself because sometimes mums tend to put themselves on the back pedal.’

Joanne told William and Kate how her energy-efficient house design is helping reduce her energy bills. Measures like this are all the more important as the whole country faces a cost of living crisis.

Joanne said: ‘With four young kids then energy bills is a big concern. There’s always a need for a new pair of shoes or new clothes.

‘I don’t need to put the heating on as much during the day in my new home. It’s made a big difference.’

Wheatley Homes Glasgow tenant chair Bernadette Hewitt said it was ‘wonderful’ to have the royal couple visit and said it was ‘a day our tenants will never forget’.

The Duke and Duchess of Cambridge also met mothers whose children receive books through a partnership between the group and the Dolly Parton Imagination Library.

The duke and duchess received a warm welcome outside the University of Glasgow (Picture: Reuters)
Kate sat it on a session with pupils designed to boost empathy (Picture: PA)
William made a joke about Kate getting broody as she held 10-month-old Saul Molloy (Picture: PA)More: Royal Family

Why is the Queen’s crown in Parliament and how much is it worth?

How old is Prince Charles and what title will he have when he becomes King?

Kirsty Holmes, 25, told the couple her four-year-old son Theo’s favourite book is The Gingerbread Man. Kate offered him a cupcake from a plate on the table and praised his Spider-Man glasses.