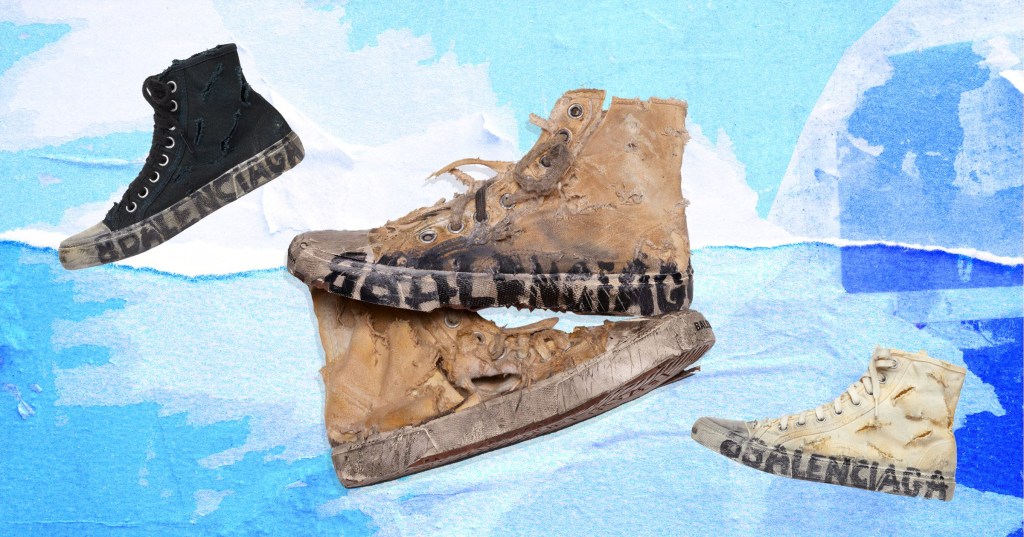 That’s right, the luxury fashion house has done it again.

Balenciaga is known for making some… intriguing choices, from stiletto Crocs to styling Joey-from-Friends-esque layered looks.

Now, the company is facing fresh derision online for unveiling a new range of trainers which cost up to an eye-watering £1,290.

What’s drawn such ire, you ask?

The most expensive of the Paris Sneakers come riddled with holes across the sides, top and backs of the cotton.

The ‘white’ soles are also stained to look filthy, and the all-important brand name is scrawled on the side of the soles in what looks a lot like marker pen.

These ‘destroyed’ high-top trainers come in black or white, while some less wrecked versions come in black, white and red, and will set you back £450.

You can also get mule versions with the backs cut off for £350.

Balenciaga will also be selling 100 pairs of limited-edition ‘extra destroyed’ versions of extra wrecked black or white ones – aren’t we lucky?

Shoppers haven’t held back sharing their thoughts online, with one saying: ‘I was having a good day until I saw this. Shaking my head.’

Another said: ‘Are they having a laugh?’

One man quipped: ‘Need these for my collection. Or I just won’t pay rent and in a month or so my shoes should look the same.’

Jokes aside, the new trainers went on sale in the UK on Monday and are already sold out in some sizes.

The Balenciaga website reads: ‘A dedicated campaign shows the shoes extremely worn, marked up, and dirtied.

‘These still life portraits, by photographer Leopold Duchemin, suggest that Paris Sneakers are meant to be worn for a lifetime.

‘A limited edition of 100 pairs of these extra destroyed sneakers will be available on balenciaga.com in either black or white while supplies last.’

Get in touch by emailing MetroLifestyleTeam@Metro.co.uk

MORE : Would you pay £825 for this Balenciaga shirt you can’t actually wear as a shirt?

Emmerdale spoilers: Kim reveals a major regret she has in devastating preview clip: ‘I never want to feel like that again!’