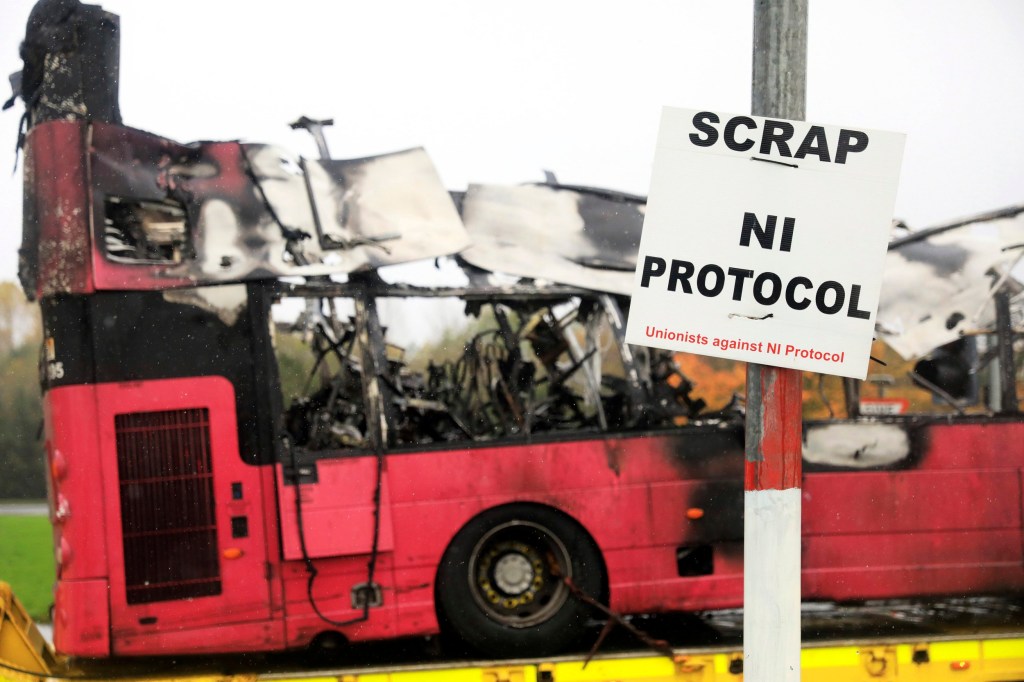 Anti-protocol vandals burned buses in protest at the deal in November but the largest party in Northern Ireland wants to keep it (Picture: AP)

The government has refrained from tearing up the Northern Ireland protocol today but could move to make sweeping changes next week.

UK ministers have been pressing Brussels for reforms to post-Brexit trading arrangements for months but talks have stalled.

The protocol is designed to prevent border checks on goods passing between the north of the island of Ireland and the Republic.

It is backed by nationalists but loathed by unionists, who say it creates a border in the Irish Sea and fundamentally changes the province’s status within the union.

Sinn Fein registered a historic win in the Stormont election last week on a pro-protocol platform but the DUP have refused to enter government until it is overhauled.

Without cooperation from Northern Ireland’s largest unionist party, there is no hope of a functioning executive being formed, raising the prospect of fresh elections later this year or even direct rule from London.

Despite the political sensitivity of the protocol in a part of the UK never far from the threat of serious disorder, Liz Truss is reportedly lining up plans to unilaterally axe much of the protocol.

The foreign secretary has given up hope of negotiations with the European Union yielding serious results, according to The Times, and is drawing up plans to scrap checks between Northern Ireland and the UK.

A law being considered by Foreign Office officials would allow businesses in Northern Ireland to disregard EU rules and regulations and remove the power of the European Court of Justice to rule on issues relating to the region, the paper said.

If the reports are correct, it would mean the government is poised to make enough changes against the EU’s will to appease unionists in Northern Ireland but stop short of triggering Article 16, which suspends the protocol in full and is the option favoured by hardline Brexiteers.

There was no mention of changes to the protocol in the Queen’s Speech, despite the government pledging to tear up regulations carried over from the UK’s membership of the EU.

The foreign secretary is reportedly drawing up plans to scrap large sections of the protocol without EU approval (Picture: AFP)

In a call with the Irish premier Michael Martin prior to the State Opening of Parliament, Boris Johnson said the situation with the protocol is ‘now very serious’.

In a Downing Street account of the call, the two leaders agreed on the vital importance of restoring the devolved institutions in Northern Ireland as soon as possible.

Emmerdale spoilers: Kim reveals a major regret she has in devastating preview clip: ‘I never want to feel like that again!’

How I Do It: ‘I can’t remember the last time I had sex – now I’m dating myself’