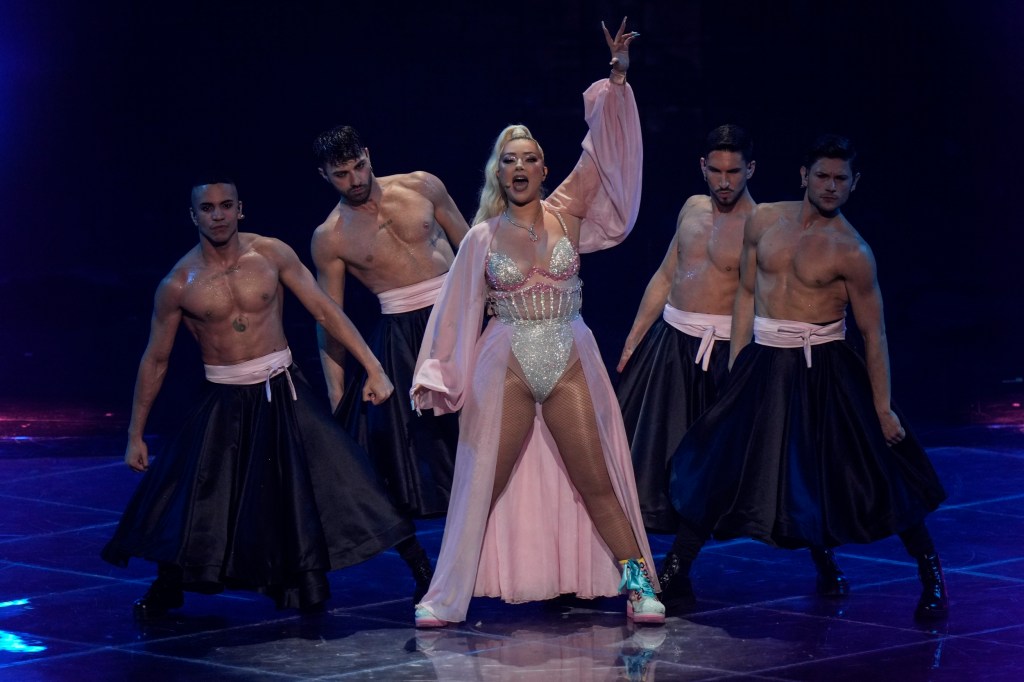 Ronela Hajati knows how to put on a show (Picture: AP)

The Eurovision 2022 semi-finals got off to a raunchy start thanks to Albania’s Ronela Hajati and her hip-popping twerking performance.

All the action kicked off on Tuesday night with Rylan Clark and BBC Radio presenter Scott Mills doing the honours of hosting the show for us Brits in the UK.

Storming the stage as the first performer, Ronela commanded attention in a glittering silver bodysuit and a fleet of male dancers and one female choreographer.

Ronela performed her track Sekret, which was originally released as a single on March 5 and was composed and written by the singer herself and produced by Marko Polo.

It’s safe to say the audience completely lapped up Ronela’s performance as she gyrated her way across the stage and against her dancers.

Even Rylan was impressed as he remarked afterwards: ‘Yes! Now that is how you start a show,’ while Scott revealed a fun fact, chiming in: ‘She had a different outfit planned but it was quite revealing.’

Albaniaâs entry in this yearâs #Eurovision is very sex positive and did not disappoint. #EurovisionSongContest2022

ohh my god the audience said it legendary #eurovision

Viewers were equally in awe, with one tweeting: ‘Albania’s entry in this year’s #Eurovision is very sex positive and did not disappoint.’

Another agreed: ‘Ohh my god the audience said it legendary.’

‘That was very girlboss of her,’ another weighed in.

One viewer predicted: ‘Albania setting the tone for the evening I feel.’

‘Albania did a good job!! Great performance,’ another commented.

The Eurovision semi-finals that are taking place on Tuesday, May 10, and Thursday, May 12, will be broadcast on BBC Three and be available on BBC iPlayer.

What are the latest odds for Eurovision 2022?

The Grand Final on Saturday, May 14, will start at 8pm and be available to view on BBC One and BBC iPlayer.

Fans will also be able to catch the competition on BBC Radio 2 and BBC Sounds.

MORE : Is Ukraine taking part in Eurovision this year and what is the song?

MORE : How old is …read more

EastEnders spoilers: Linda and Mick reunite as she professes her love?