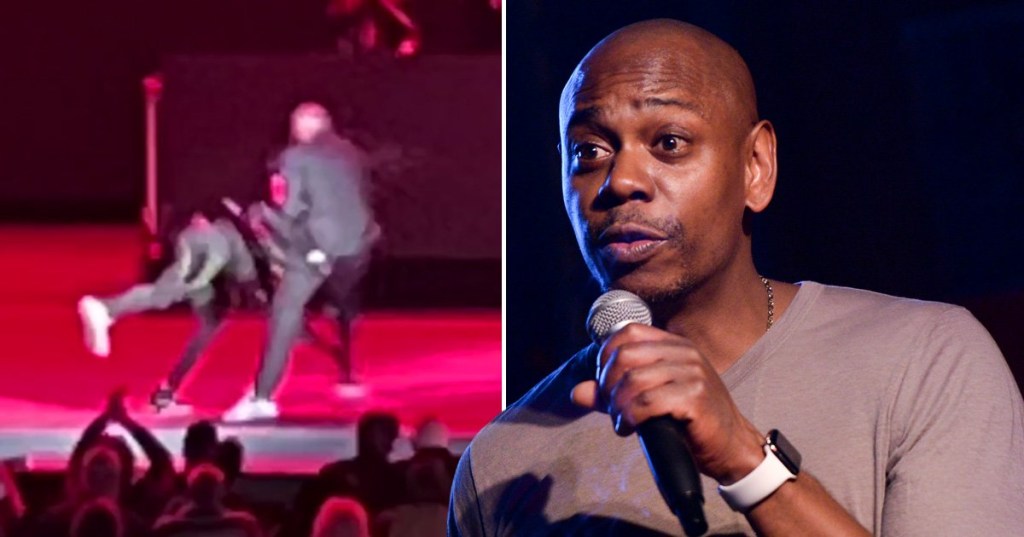 Dave Chappelle was attacked on stage at the Hollywood Bowl (Picture: Getty)

Dave Chappelle’s set where he was attacked on stage will not be streamed on Netflix.

The comedian was ‘tackled’ during his show at the Hollywood Bowl last week, with 23-year-old Isaiah Lee, who was carrying a replica gun containing a knife blade, arrested on suspicion of assault with a deadly weapon.

Following the incident, it has been reported that Chappelle’s performance for the streaming giant’s Netflix Is A Joke Fest won’t be uploaded.

The decision, however, was made before the festival, as it was confirmed that his four sold-out shows were not being taped for the special.

Chappelle did have his own cameras present at the venue and it’s likely that professionally recorded footage of the attack does exist, however it isn’t in Netflix’s hands.

Chappelle said that following the incident he had convinced venue security to let him speak to Lee who, he said, appeared to be mentally ill.

Netflix will not be streaming Chappelle’s set from the Netflix Is A Joke Fest (Picture: Getty)

He was charged with battery, possessing a deadly weapon with intent to assault, unlawfully crossing from a spectator area on to a stage at a theatrical event, and interfering with or delaying such an event with unlawful conduct.

Lee, who remains in custody, was ordered to stay at least 100 yards (91 metres) from Chappelle, whose lawyer requested the protective order.

Los Angeles prosecutors said they would not be pressing felony charges.

A spokesperson for Chappelle previously said that he is refusing to allow the attack to overshadow ‘the magic of the historic moment’.

‘Dave Chappelle celebrated four nights of comedy and music, setting record-breaking sales for a comedian at the Hollywood Bowl,’ a statement read.

‘This run ties Chappelle with Monty Python for the most headlined shows by any comedian at the Hollywood Bowl, reaching 70,000 fans of diverse backgrounds during the first Netflix Is A Joke: The Festival, and he refuses to allow last night’s incident to overshadow the magic of this historic moment.’

It added that as ‘unfortunate and unsettling’ as the incident was, Chappelle carried on with the show by introducing the last musical guests for the evening, hip hop duo Black Star.

It also noted that Chappelle is ‘fully co-operating with the active police investigation into this incident’.

May 19 – The Hall: Honoring the Greats of Stand-Up

June 7 and 12 – That’s My Time with David Letterman

June 9 – Stand Out: An LGBTQ+ Celebration