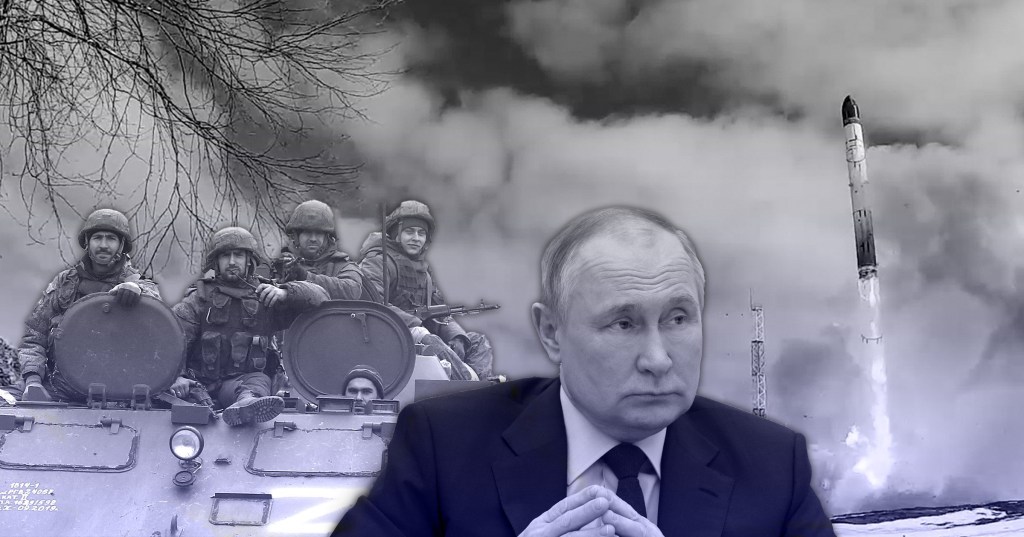 Vladimir Putin has led Russia into an invasion of Ukraine that has cost thousands of lives and led to heightened military tensions with the West (Picture: Reuters/AP/EPA)

Vladimir Putin needed the Victory Day parade to ‘fuel his ego’ with his inner circle ‘likely petrified’ of showing dissent to his invasion of Ukraine, a British risk management analyst has said.

Dan Kaine spoke after the Russian president took centre stage at a muscle-flexing show of arms in Moscow’s Red Square.

Mr Kaine, of Inherent Risks, spoke as the risk management company undertakes work on the ground including delivering military kit and supplies of aid into Ukraine on behalf of international donors.

Giving a withering assessment of the drum-beating parade marking the 77th anniversary of the Soviet Union’s victory over Nazi Germany in World War Two, he said the Russian president desperately needed to paper over the cracks in his catastrophic invasion.

Mr Kaine, head of risk and crisis advisory, said: ‘Vladimir Putin is a power-hungry narcissist who needs events such as the Victory Day parade to fuel his ego. He will use it as a show of force to his brainwashed and disillusioned followers to give the illusion that he is still in control of a war that Russia is very much losing.

‘The Russian economy is failing, and in turn, the Russian people are suffering. The poor are getting poorer. The hungry are getting hungrier. And Putin’s close circle are likely petrified.

‘They all need a sense of “winning”. The Victory Day parade was a show of antiquated equipment and poorly trained soldiers, overshadowed by a nuclear arsenal which, let’s face it, if Putin didn’t have, NATO would have intervened and stopped this war a long time ago.’

Since launching the invasion 75 days ago, the Russian leader has faced hitherto unknown dissent from frontline troops within his own ranks, which has caused reported desertions and acts of insubordination.

Speculation has arisen as to who would replace him if he stepped down or was somehow eliminated.

‘The question has been asked several times, why doesn’t someone kill Putin and this will all be over,’ Mr Kaine said.

‘The risk is, as with killing Osama bin Laden, you then go from having one psychopathic leader who is revered by their followers and who intelligence services can try to understand and predict, versus the risk of spawning multiple leaders with their own ideals and then trying to monitor all of them.

‘There is no guarantee that, if Putin was killed, his generals would breathe a sigh of relief and immediately end the conflict.

‘If they are brainwashed, they might continue their own battles, not together, …read more