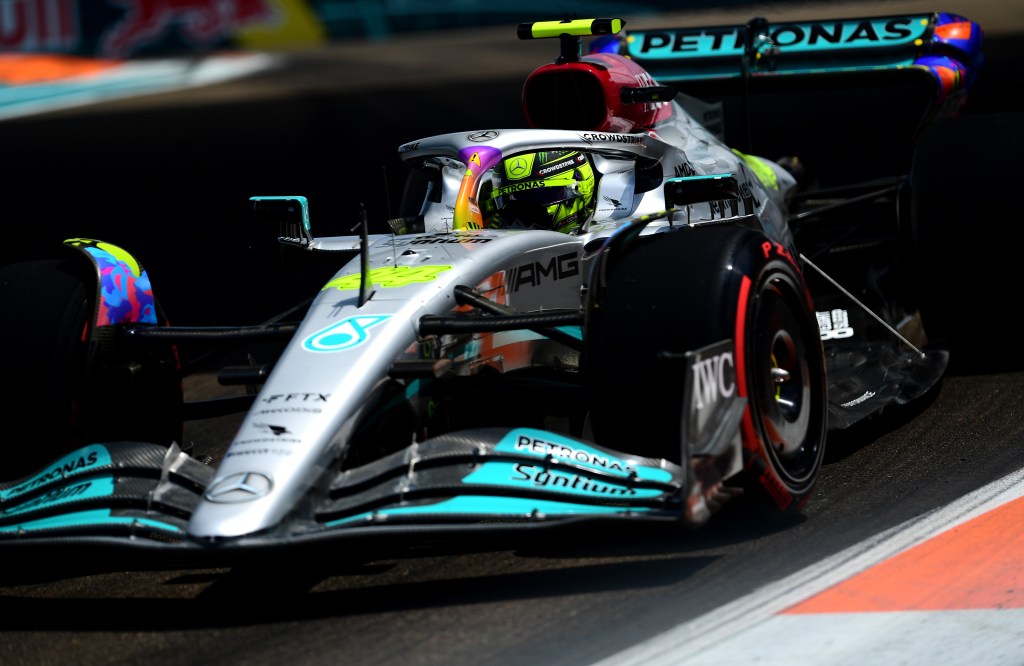 Lewis Hamilton once again lost out to George Russell because of safety car timing. (Photo by Mario Renzi – Formula 1/Formula 1 via Getty Images)

Lewis Hamilton has questioned his Mercedes team’s refusal to make a decision about whether to take an extra pitstop behind the safety car during Sunday’s inaugural Formula 1 Miami Grand Prix.

The seven-time world champion started sixth and finished there after a punishing race in brutally warm conditions in Florida, which was hosting its first event after signing a 10-year contract with F1 at a purpose-built street facility around the outskirts of the Miami Dolphins’ Hard Rock Stadium.

Mercedes’ issues with its new W13 car, which suffers from intense bouncing at high speeds on long straights and is simply slower than frontrunners Red Bull and Ferrari through the corners, have rendered Hamilton unable to challenge for race victories so far this season, and he has already ruled himself out of contention for the 2022 championship.

Just like in two of the campaign’s previous two races at Albert Park in Australia and Jeddah in Saudi Arabia, Hamilton was leapfrogged by team-mate George Russell in large part because of unfortunate safety car timing in Miami.

The 24-year-old started on the hard tyres and was able to stay out on track until Lando Norris and Pierre Gasly’s crash led to a safety car period which allowed him to take a pitstop which cost him less time than usual. On fresh medium tyres, Russell was easily able to glide past his illustrious team-mate and finished one position ahead of him could the chequered flag.

During that same safety car period, Mercedes toyed with the idea of bringing Hamilton in to switch onto a pair of fresh soft tyres, but left the decision up to the driver himself. With Hamilton having no knowledge of where other cars are on circuit, nor what tyres those around him were running, the 37-year-old was bemused by race engineer Peter Bonnington’s choice to repeatedly ask Hamilton what he thought was best rather than making a clear decision.

‘In that scenario I have no clue where everyone is, so when the team say it’s your choice I don’t have the information to make the decision,’ Hamilton told Sky Sports F1 after the race.

‘That’s what your job is, make the decision for me – you’ve got all the details, I don’t. That’s what you rely on the guys for, but today they gave it to me and I don’t understand it, but anyways…

‘Just a bit unfortunate with the safety car but at least we got points today, we are finishing, reliability is good. I’m excited to, at some stage, take a step forward, which we haven’t yet.’

Mercedes’ W13 is off the pace of …read more

I am fearful on CTA trains these days