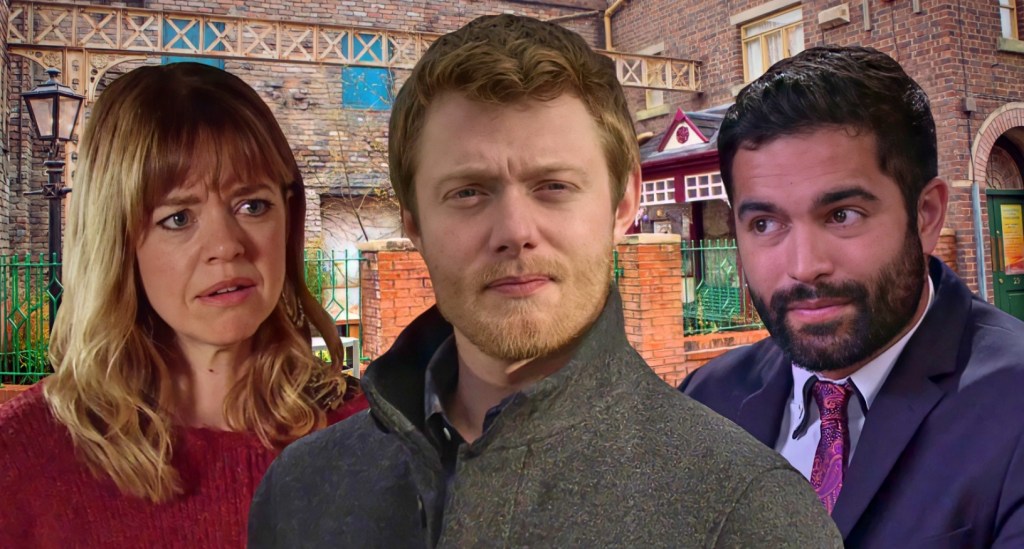 Huge showdowns and decisions to be made (Picture: ITV)

Coronation Street is an unstoppable machine right now and the latest accolade is heading to their packed awards cabinet as the long running show has been recognised at the TV BAFTAs as the Best Soap/Continuing Drama.

The storyline which showed a hate attack on Nina Lucas (Mollie Gallagher) and her boyfriend Seb Franklin (Harry Visinoni) is arguably one of the most important and hard hitting issues tackled in the genre and viewers were impacted across the country by the sensitive but non diluted episodes.

Accepting the award, the team dedicated the prize to Sophie Lancaster, on who Nina’s story was based, and her mum Sylvia, who recently passed away but has tirelessly campaigned and raised awareness in relation to hate crime since her daughter’s death.

The show has been on fire with fans and it isn’t just this particular story which has won acclaim from viewers and critics alike.

“The drama and the comedy goes so well on Corrie!” you aren’t wrong Sally! @itvcorrie wins the Soap & Continuing Drama Award ð pic.twitter.com/oVjLdSIouv

And if you expected the soap to slow down in the post award bask, you don’t know your Corrie. With new storylines unfolding, others exploding in major peaks packed with tweaks and some familiar faces heading to the cobbles, the action will continue over summer.

The war between Imran Habeeb (Charlie de Melo) and Abi Franklin (Sally Carman) has already caused agony and heartbreak for the players involved, with Imran determining to take Alfie from Abi. With Toyah Battersby (Georgia Taylor) rocked by the behaviour of Imran, things are set to reach a shocking peak.

It’s no secret that Charlie de Melo is leaving the role of the sly lawyer and, with show boss Iain MacLeod having teased a high octane ride, just who will be the biggest victims in this whole mess?

Time up for Imran? (Picture: ITV)

Will Imran steal Alfie away from Abi from the Street, leaving Abi devastated or will he leave the Street in shame, exiled by those he has hurt? Viewers are hoping for a comeuppance to land on his doorstep but they will have to wait to see how far he may fall – if indeed he will at all.

Elsewhere, the crisis of confidence will continue to impact the life of teenager Summer Spellman (Harriet Bibby) as her struggles continue. She may have taken the brave step of seeking help but her body issues will plague her and, with her previously taking dangerous action by ditching her insulin, recent issues may be set to be repeated. But will she come through it this time?

With everything that has happened with Max Turner (Paddy Bever) and also what Nicky Wheatley (Kimberly Hart-Simpson) has endured, Daniel Osbourne (Rob Mallard) is questioning his future in his teaching career. And with Nicky’s feelings for …read more

Stock Market: Suez Canal Update! Floating!
One in three think the Queen should put her feet up and let Charles take over

Eurovision 2022: How do you vote and how much does it cost?