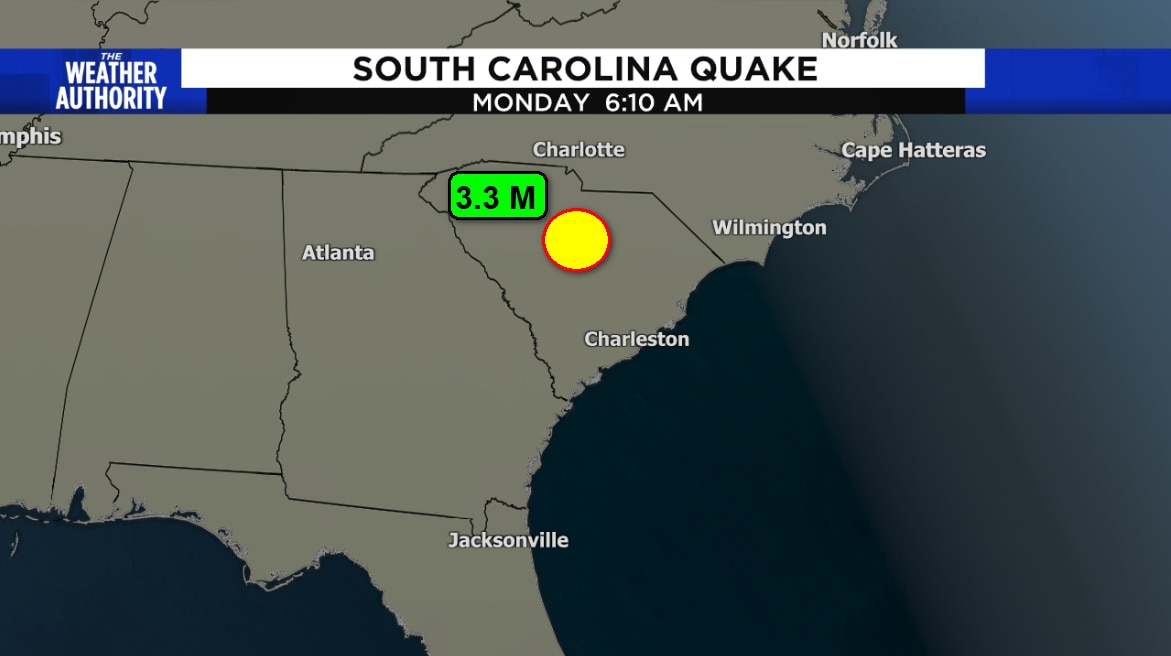 On Monday morning, the Midlands of South Carolina had a 1-second jolt.

A rather minor 3.3-magnitude earthquake took place at 1:33 a.m., yet it was a very shallow earthquake — only about 2 miles below the surface — allowing it to be felt in Richland County, South Carolina’s third most populous county. In response, thousands of residents in Richland County responded to the United States Geological Survey website to make a report.

Here are the statistics they received.

In Florida and South Georgia, we don’t generally feel earthquakes, as we have a deep sandstone layer just below the surface. This acts like a shock absorber dampening out the shock waves of an earthquake. But we have had reports of impacts of earthquakes. Here’s a partial list from Shakeout.org

“…Although Florida is not usually considered to be a state subject to earthquakes, several minor shocks have occurred there and other more earthquake prone States, such as South Carolina, can cause earthquakes that can be felt in Florida.

“A shock occurred near St. Augustine, in the northeast part of the State, in January 1879. The Nation’s oldest permanent settlement, founded by Spain in 1565, reported that heavy shaking knocked plaster from walls and articles from shelves. Similar effects were noted at Daytona Beach, 50 miles south. At Tampa, the southernmost point of the felt area, the trembling was preceded by a rumbling sound at 11:30 p.m. Two shocks were reported in other areas, at 11:45 p.m. and 11:55 p.m. The tremor was felt through north and central Florida, and at Savannah, Georgia.

“In January 1880, Cuba was the center of two strong earthquakes that sent severe shock waves through the town of Key West, Florida. The tremors occurred at 11 p.m. on January 22 and at 4 a.m. on the 23rd. At Buelta Abajo and San Christobal, Cuba, many buildings were thrown down and some people were killed.

“The next tremor to be felt by Floridians also centered outside the State. It was the famous (devastating) Charleston, South Carolina earthquake shock in August 1886. The shock was felt throughout northern Florida, ringing church bells at St. Augustine and severely jolting other towns along that section of Florida’s east coast. Jacksonville residents felt many of the strong aftershocks that occurred in September, October, and November 1886.

“On June 20, 1893, Jacksonville experienced another slight shock, apparently local, that lasted about 10 seconds. Another minor earthquake shook Jacksonville at 11:15 a.m., October 31, 1900. It caused no damage…”

Can a ‘big one’ happen here in Jacksonville?

There are three basic types of earthquakes: tectonic, volcanic and explosion.

Tectonic earthquakes are when two large areas of land crush into each other. There are also plates that spread apart causing earthquakes.

In North Florida and South Georgia, we are not near any of these unique conditions.

So, at most, we could feel the ground shake and …read more