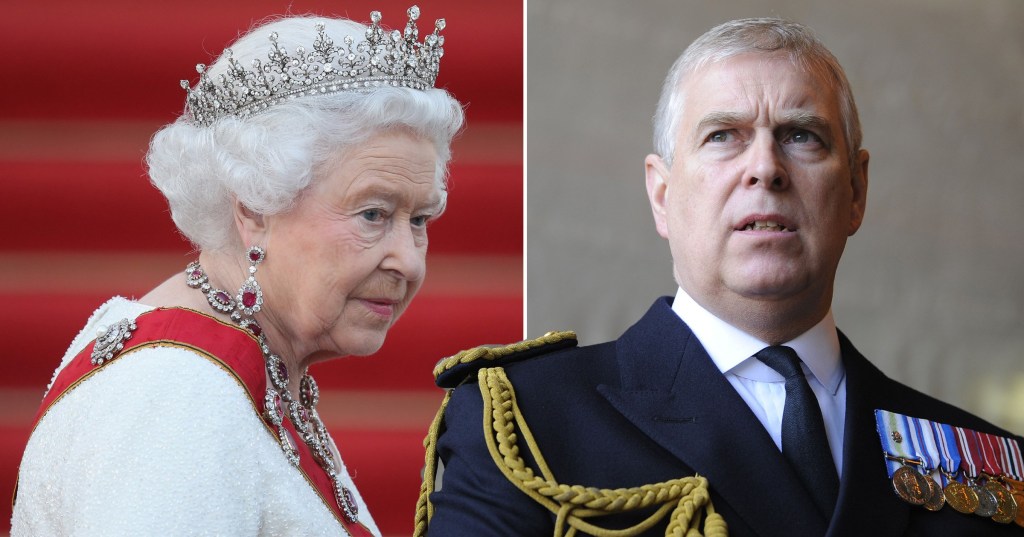 The Queen, William and Charles are all said to be ‘furious’ with Andrew (Picture: Getty Images)

The Duke of York was left ‘shell-shocked’ as the Queen stripped him of his military titles and royal patronages, a source close to him has said.

Prince Andrew will no longer go by His Royal Highness and will fight his sex abuse lawsuit as a ‘private citizen’.

It is understood he was summoned by his mother on Thursday and told of her decision following an emergency summit with Prince William at Windsor Castle.

Andrew is thought to have been cut off because of the crisis his civil case in New York is causing the Royal Family.

The duke is understood to have no discernible income and will soon own no property once the sale of a £17 million chalet in the Swiss Alps goes through.

He is now said to be fearing ‘financial ruin’, as he faces a potential settlement of £10million with his accuser Virginia Giuffre and lawyers’ fees of at least £2million.

Ms Giuffre, 38, claims she was trafficked by billionaire paedophile Jeffrey Epstein – an old friend of the duke’s.

The Duke of York has vowed to continue fighting the civil lawsuit against him in New York (Picture: AFP/Getty Images)
Prince Andrew, pictured with Virginia Giuffre aged 17 and Ghislaine Maxwell in 2001 (Picture: REX/Shutterstock)

She says she was forced to have sex with Andrew when she was 17 and a minor under US law.

The duke vehemently denies all allegations and says he can’t even remember meeting his accuser.

Although his legal team believe they can settle out of court, Ms Giuffre’s lawyer David Boies has said she is not motivated by money and ‘wants justice’.

On top of his lawsuit, Andrew has also had to pay £6million to settle an outstanding debt with French socialite Isabelle de Rouvre, who sold him and ex-wife Sarah Ferguson the chalet in 2014.

A royal source told The Mirror: ‘Until very recently it appears the absolute enormity of this case and the consequences he faces has not hit him (Andrew).

It is understood the Queen would not help her son pay a settlement because of how it would make the Royal Family look (Picture: Getty Images)
Ms Giuffre’s lawyer says she is not motivated by money and that she ‘wants justice’ (Picture: PA)

‘Now the bills are mounting up and the possibility of a settlement, or even worse a judgement against him, is being widely discussed; he fears complete financial ruin.

‘Andrew thought, indeed he was advised that this would all go away in time and neither has happened, leaving him facing an extraordinary uphill battle to even salvage any crumb of his reputation. There is a very real prospect of him being completely broke.’

It is understood the Queen ‘would not assist’ with her son paying a settlement to Ms Giuffre because of what this would do to the Crown’s image.

Steam Deck will ship in February despite supply issues