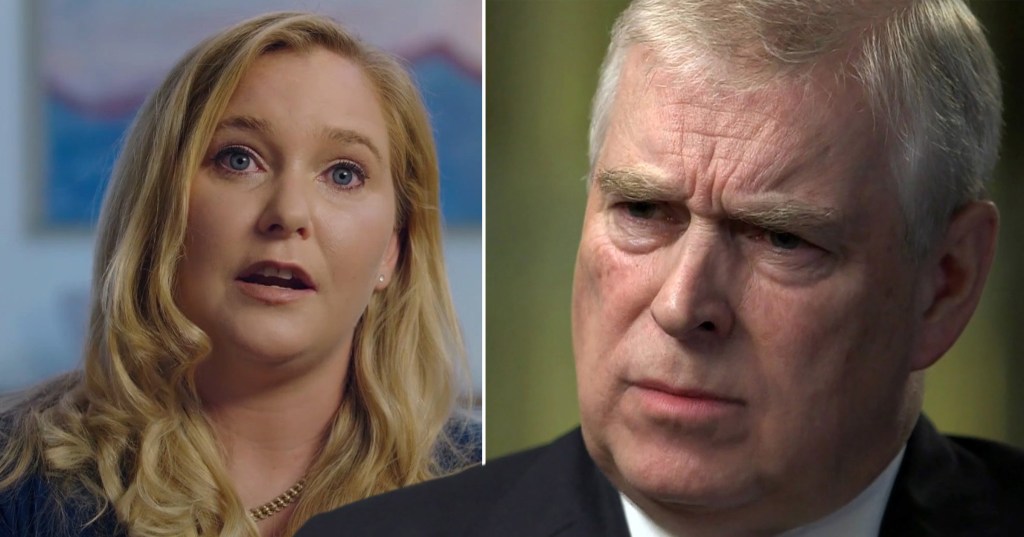 Virginia Giuffre is suing the Duke of York (Picture: BBC/PA/Getty)

Prince Andrew wants to question Virginia Giuffre’s husband and psychologist as part of his civil sex case, arguing that she could be suffering from ‘false memories’, court documents have revealed.

The Duke of York’s lawyers have asked to interview Robert Giuffre on a range of areas, including the circumstances under which he met his now wife around 2002, her relationship with Jeffrey Epstein and Ghislaine Maxwell, and the household finances.

They also want to quiz Dr Judith Lightfoot about Ms Giuffre’s claims to have been under the threat of death of bodily harm from the convicted sex offenders, and any links that may have to the allegations against Andrew, The Telegraph reports.

In recently published documents, lawyers for the Queen’s son argue that Ms Giuffre ‘may suffer from false memories’.

Both Mr Giuffre and Dr Lightfoot are residents of Australia and would be requested to be examined under oath, either in person or by video-link.

The legal requests come after the news earlier this week that a judge had thrown out a motion by Andrew’s lawyers to dismiss the case, ruling it can go to trial.

Lawyers want testimony to be obtained from the witnesses by April 29 this year ‘or as soon thereafter as is possible’.

The trial is scheduled to take place between September and December.

Andrew’s lawyers have requested that the US court issues letters to the Central Authority of Australia for their assistance in obtaining the testimony.

Her team is seeking witness accounts from Andrew’s former equerry Robert Olney and a woman called Shukri Walker, who claims to have seen the royal in Tramp nightclub.

They say this means it is likely Mr Olney has relevant information about Andrew’s travel to and from Epstein’s properties during the relevant period.

The documents say Ms Walker has stated publicly in the press that she was a witness to Andrew’s presence at Tramp during the relevant time with a young woman who may have been Ms Giuffre.

Lawyers for the Queen’s son argue that Ms Giuffre ‘may suffer from false memories’ (Picture: Reuters)

Ms Giuffre is suing the duke in the US for allegedly sexually assaulting her when she was a teenager and claims she was trafficked by Andrew’s friend, convicted sex offender Epstein, to have sex with the duke when she was 17 and a minor under US law.

The duke has strenuously denied the allegations and a source close to him said he will ‘continue to defend himself against these claims’.

Holby City spoilers: Amelia and Jac receive an update on their brain tumours