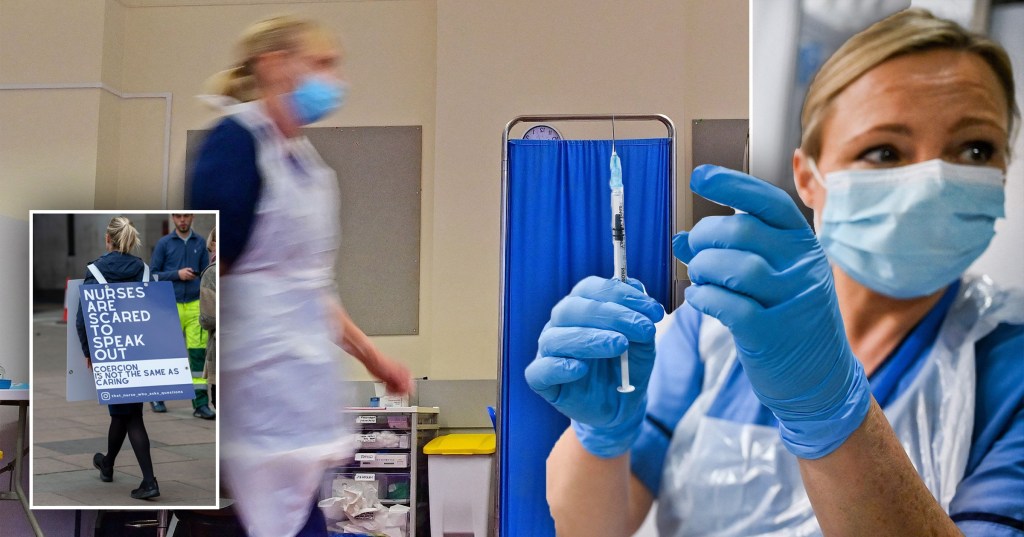 Healthcare staff in England who haven’t had the Covid vaccine face being sacked without any exit payment, an official document shows.

Frontline workers must be fully vaccinated against Covid-19 with two jabs by April 1 – meaning they must have had their first shot on February 3.

Healthcare employers have been told that from February 4, unjabbed staff should be invited to a meeting and told that a potential outcome may be dismissal.

The guidance published yesterday is for the implementation of Vaccination as a Condition of Deployment (VCOD).

The 24-page document says: ‘It is important to note this is not a redundancy exercise. In the context of the regulations, there is no diminishment or cessation of work of a particular kind.

‘Employers will not be concerned with finding “suitable alternative employment” and there will be no redundancy entitlements, including payments, whether statutory or contractual, triggered by this process.

‘The redeployment or dismissal of workers is determined by the introduction of the regulations and an individual’s decision to remain unvaccinated.

‘Whilst organisations are encouraged to explore redeployment, the general principles which apply in a redundancy exercise are not applicable here, and it is important that managers are aware of this.’

The guidance says employers should engage and work in collaboration with their trade union or staff side representatives, as to the formal measures being taken ‘in respect of redeployment processes and potential dismissals of staff due to VCOD’.

Alternative options potentially available to an unvaccinated staff member – such as any possible adjustments to their current role, restrictions to duties or redeployment opportunities available – should also be explored, the document says.

It says that from February 4, formal meetings which could result in a worker’s dismissal can be held either in person virtually.

The document comes after leading midwives called for an ‘immediate delay’ to plans for mandatory Covid-19 jabs for frontline health workers.

The Royal College of Midwives said that the policy could have a significant impact on maternity services, arguing this week that current staff absences are at their highest level since the pandemic began.

The college said there are ‘chronic understaffing’ issues in the sector with an estimated shortfall of around 2,000 midwives, fearing the policy will see levels fall further still.

NHS national medical director Professor Stephen Powis said the health service has ‘always been clear that the life-saving Covid vaccination is the best protection against the virus’.

He added that nine in ten staff in NHS organisations have already had their second jab, and that employers will continue to support and encourage workers to take up the offer before the new rules come into effect.

Married at First Sight Australia 2022: From beauticians to pro wrestlers, meet the new contestants getting hitched