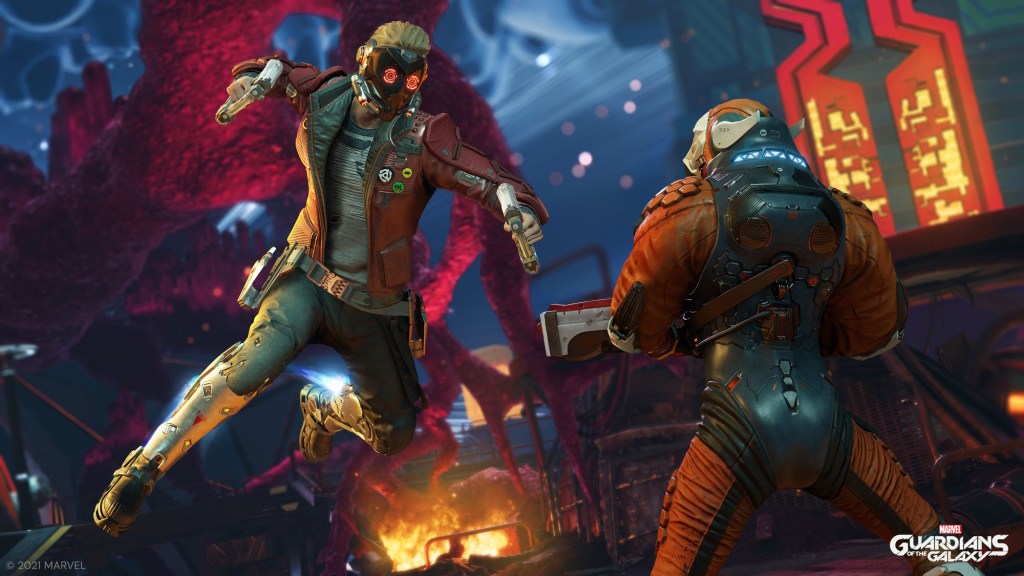 Guardians Of The Galaxy – helping to create a merry Christmas (pic: Square Enix)

A reader compares his experience of playing PS5 and Xbox Series X, with games including Guardians Of The Galaxy and Kena: Bridge Of Spirits.

What with work and other commitments, I do not get as much time for gaming as I would like and so nearly two weeks off over Xmas has been a chance to really get stuck into a few new releases.

The time was made even more pleasurable as I received a shiny new PlayStation 5 for my birthday just before the Xmas break (nothing prepares you for how big and heavy that thing actually is). This now sits proudly alongside my Xbox Series X.

So, with the PlayStation 5 set-up, I started off with the built-in Astro game to loosen up my gaming muscles and what a joy that was. I am old enough to remember when every console had a built-in game and this was just a perfect way to show off the new controller, great fun and the right length. I am not sure it would have benefitted from being a full game and, much more, would have diluted the experience.

I moved on to Kena: Bridge Of Spirits thinking that this would be another game to ease me back into my gaming groove. It looks stunning and is a great fun title, but it did get surprisingly challenging from about two-thirds in. The second boss was a pain. Still, another great game and about as near as you will get to a Zelda type experience outside of playing on a Nintendo device.

Next up was a bit more controversial but I really enjoyed The Gunk on the Xbox Series X. OK, it is pretty simple but as a palette cleanser between big, open world games it was a joy and it was nice to find something that can be completed in a day and is just relaxing. Would I buy it? No, but as a Game Pass option it was perfect and this is where Game Pass excels. Titles like this and titles like The Artful Escape were great experiences but too short and too one-note to warrant a purchase.

Next up was the highlight of the Xmas gamefest: Guardians Of The Galaxy. So well written, decent acting, fun action, just a real joy of a game. At one moment, towards the end, it even nearly brought a tear to my eye. This is one of my favourite games of the year and I can honestly say that my relationship towards this iteration of the crew grew from being annoyed to actually preferring them to the MCU versions. When the team suddenly start carrying out actions without needing to be asked was just a standout example of how they developed throughout the game.

So, Xmas is over now and I am back at work and about halfway through Ratchet & Clank: Rift Apart. This has been a slight …read more