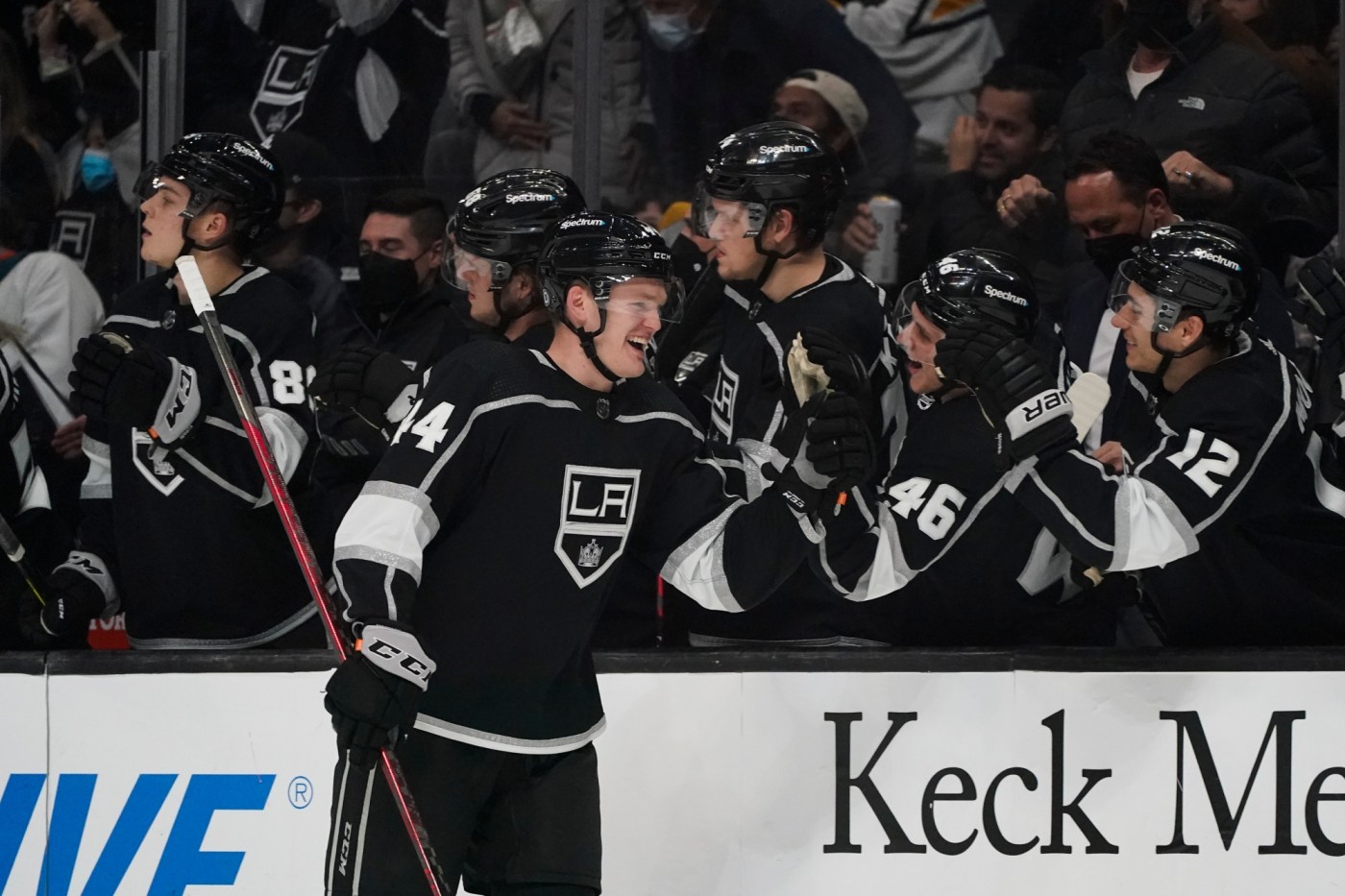 LOS ANGELES –– The Kings scored three goals in a span of 83 seconds in the third period to take control in their 6-2 victory over the Pittsburgh Penguins on Thursday night at Crypto.com Arena.

Center Anze Kopitar had two goals and an assist to pace the Kings, who won for the fifth time in their last six games. It was Kopitar’s seventh multipoint game of the season and his first since Nov. 30.

Winger Brendan Lemieux was a late scratch and Samuel Fagemo made his NHL debut in Lemieux’s stead.

Defenseman Kris Letang and winger Radim Zahorna scored for a Pittsburgh team that had won 11 of its previous 12 games. Forward Jeff Carter returned to Staples Center for the first time since being traded last season and was honored with a first-period video tribute. Penguins goaltender Tristan Jarry had 39 saves.

With 1:40 left, the Kings added an insurance goal, with an offensive-zone faceoff win setting up Durzi’s goal from the blue line.

A minute and 50 seconds after Pittsburgh drew even, the Kings responded with two goals in 10 seconds and then a third 73 seconds later. Kopitar set up Anderson with a diagonal pass across most of the zone for Anderson, who hammered a slap shot for his first goal of the season.

Then it was winger Trevor Moore skating down a long pass along the boards and sending the puck across to an open Arvidsson for a redirection goal.

Lastly, it was Durzi moving the puck low for winger Iafallo, who slid it across to Kopitar for a tap-in tally.

Less than two minutes into the final period, the Penguins had tied the score. It was Zohorna finding quiet ice between the circles and one-timing the puck between Quick’s pad and blocker.

The Kings carried a 2-1 edge and a 30-17 advantage in shots on goal into the second intermission, thanks to a power-play goal and some late-period magic from Quick, thwarting an odd-man rush and a breakaway in the final minute.

After a first period that saw a goal per side and some more superb saves by Quick, Jarry owned the second period, making a number of challenging stops in a period when he faced 20 shots to Quick’s eight. They included stopping a short-handed Blake Lizotte breakaway and, earlier, stoning Iafallo at the end of a tic-tac-toe sequence during a power play.

During that same power play, however, the Kings earned their first lead of the night, almost 35 minutes into the game. Durzi’s shot created a rebound that Brown popped in from the side of the net. Brown has four points …read more

Review: ‘Band’s Visit’ in SF is not your typical musical (and that’s good)

US plans $50B wildfire fight where forests meet suburbia