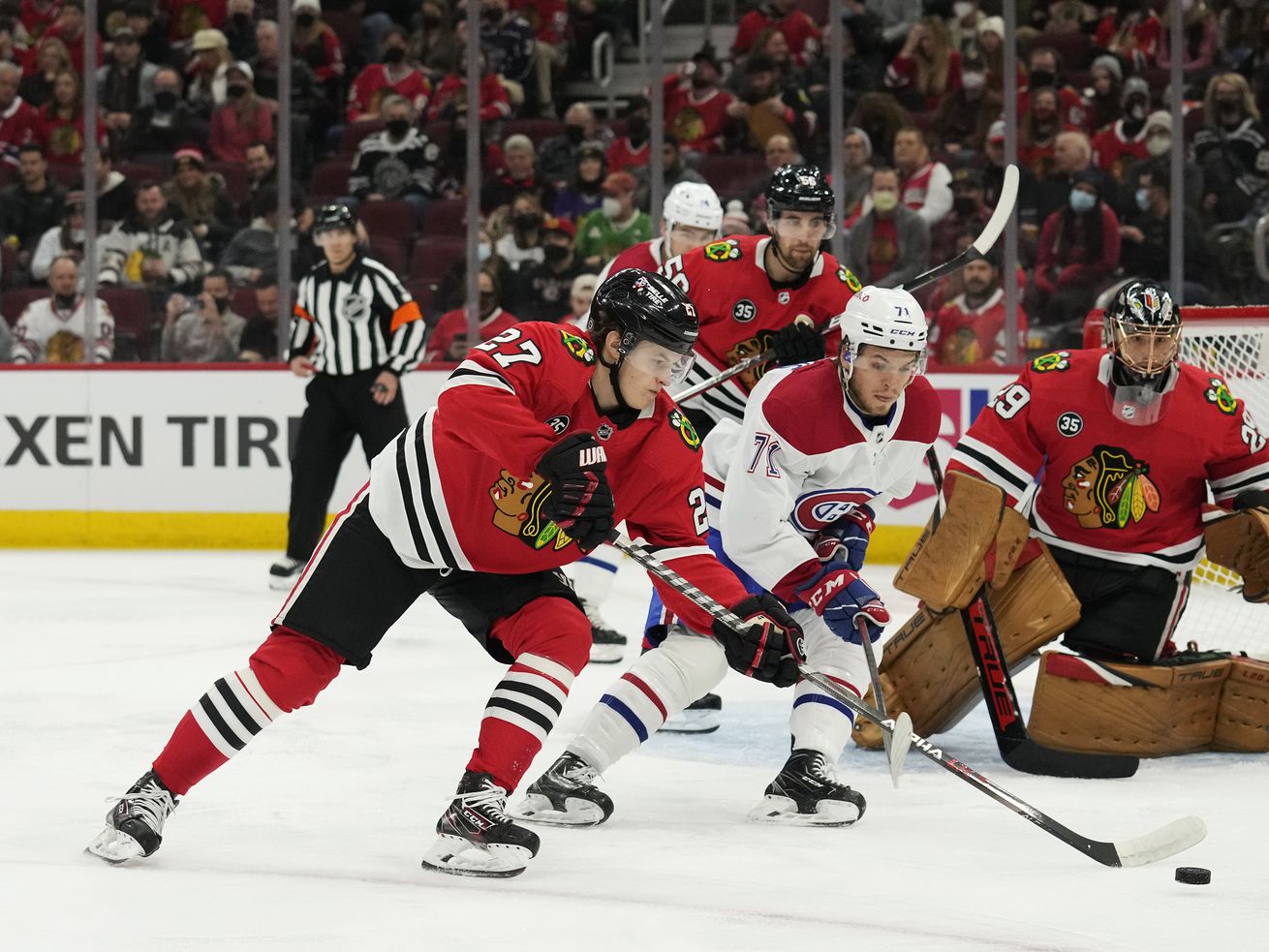 Ahead of his NHL debut Thursday against the Canadiens, Lukas Reichel looked up at the Blackhawks’ whiteboard of lines, saw Patrick Kane’s name next to his and laughed.

“I was…like, ‘Oh my god, that’s awesome,’” he said pregame. “I’m really happy. He’s my favorite player. Now we’re on the same line and I just want to…make plays with him and have fun.”

Alongside Kane and Brandon Hagel, the Hawks’ top prospect did make a few plays early but also looked understandably nervous during the Hawks’ 3-2 overtime win.

Kane scored his first goal since Dec. 4 to tie the game in the third period, and Philipp Kurashev scored the strangest of overtime winners — after two reviews of the play — to secure the Hawks’ third consecutive victory.

Reichel’s agility, creativity and offensive vision — the traits that make his ceiling so high — were nonetheless visible, at least during scattered moments. His parents weren’t able to make it to the United Center but stayed up basically through the night in Germany to watch.

Despite Reichel’s big role Thursday, the Hawks plan to be patient with him. He implied he’ll play again Saturday against the Ducks, then head back to Rockford of the AHL for a while. Interim coach Derek King had explained Wednesday the logic behind that game plan, and Reichel sounded on board with it.

“He’s obviously one of our highly skilled prospects coming up, and we want to do it right,” King said. “There have been years of seeing players get called up early, started too early, and they don’t end up finishing with our team. So this is a chance to do it right by him.”

“I agree,” Reichel said. “I want to stay here, but it’s good for me if they send me to Rockford, [where I get] more minutes, first power play, play a bigger role.”

For the first time, Alex DeBrincat is an NHL All-Star. Entering Thursday sitting fourth in the league in goals (23), he was an obvious choice to represent the Hawks during the Feb. 3-6 event in Las Vegas.

Seth Jones, meanwhile, is a candidate for the “Last Man In” spot that’ll be determined by fan vote.

The Hawks got three players back from COVID-19 protocols Wednesday and Thursday — then promptly placed two new players on the list.

Hagel, Erik Gustafsson and newly acquired Sam Lafferty all returned, but Dylan Strome and Kirby Dach were ruled unavailable shortly due to COVID before game time. Kurtis Gabriel, who was just assigned Wednesday to Rockford, was also added to the list.

Hagel said he was asymptomatic and unaffected physically by the virus, but he did encounter …read more

Eamonn Holmes fears Ruth Langsford becoming his carer: ‘She hasn’t got the most caring nature’

Woman gets revenge on ‘cheating ex’ using a lot of glitter: ‘It’ll haunt him for years’