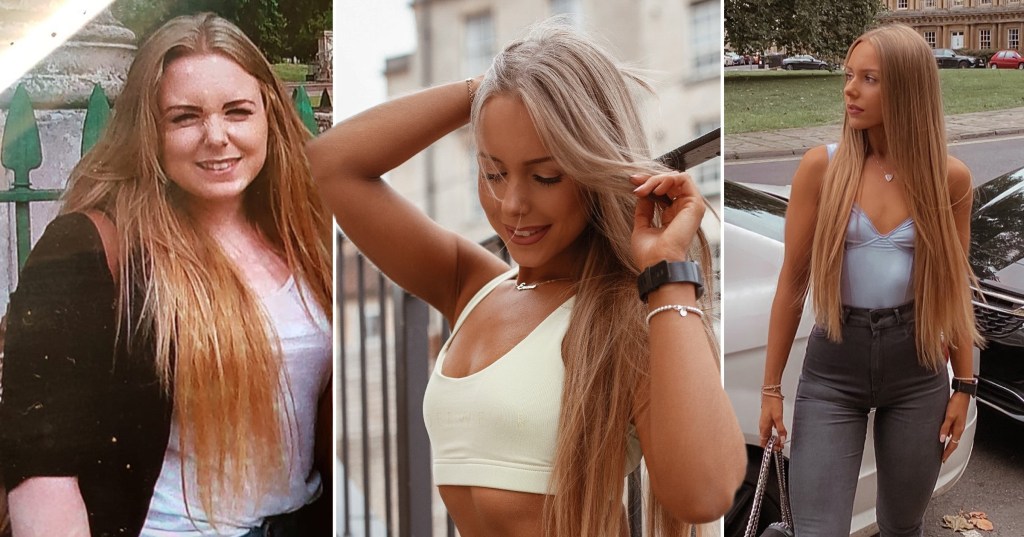 After being called a ‘whale’ by bullies as a teenager, Emma Doherty developed an eating disorder that left her anxious about eating anything ‘unhealthy’.

Now 24, the student ‘became a recluse’ after cruel taunts saw her being home-schooled in the final year of her GCSEs.

She began comfort eating while facing depression, but her relationship to food worsened in 2016 while on holiday in Mallorca.

Emma, from Bath, Somerset said: ‘I used to be extremely active, I used to be dancer. But when the bullying happened, I shut off and used food as comfort.

‘I even had girls throw food at me. It was awful and I became a recluse. I ate takeaways, ice cream and chocolate.

‘Because I hated myself, I didn’t see the point in eating healthily.

‘Then, on holiday in Mallorca with my mum and sister, I was the most depressed I’d ever been, because of how I felt about how I looked.

‘While other girls my age were in bikinis, I was all covered up in a hoodie, because I hated the way I looked.

‘So, when I came back, I joined a small gym, where I didn’t think anyone would see me. But then I became obsessed with healthy eating and diet, which was even worse.’

Emma wanted to get healthy, but soon tipped into an unhealthy obsession (Picture: PA Real Life)

Emma eventually saw her fixation on food and exercise was ruining her wellbeing and having done some research, discovered her condition was called orthorexia.

Having restricted her diet immensely and doing cardio every day, she recognised something wasn’t right.

At this point, she began fighting to get well.

She said: ‘After overeating for years, I went to the opposite extreme, developing an eating disorder and going down [in weight].

‘I was skin and bone and I had a really disordered way of eating. I was actually scared of food.’

She continued: ‘I’d wanted to make a change, but I went too far. And, after I lost all the weight, I still wasn’t happy with how I looked.’

By 2019, she was ‘terrified’ by the very thought of the pizza, pasta and chocolate she had once loved.

She said: “Everyone thought losing all the weight would make me happy, but it didn’t.

‘My entire life was consumed by thoughts of calories and how skinny I was, and how I couldn’t go out and eat.

‘I had to make excuses for why I couldn’t go out for a meal with anyone. I was simply too scared to.’

As a result of her weight loss, her periods stopped for two years and …read more

Tiny one-bed flat that looks like a shed from the outside is on the market for £430,000