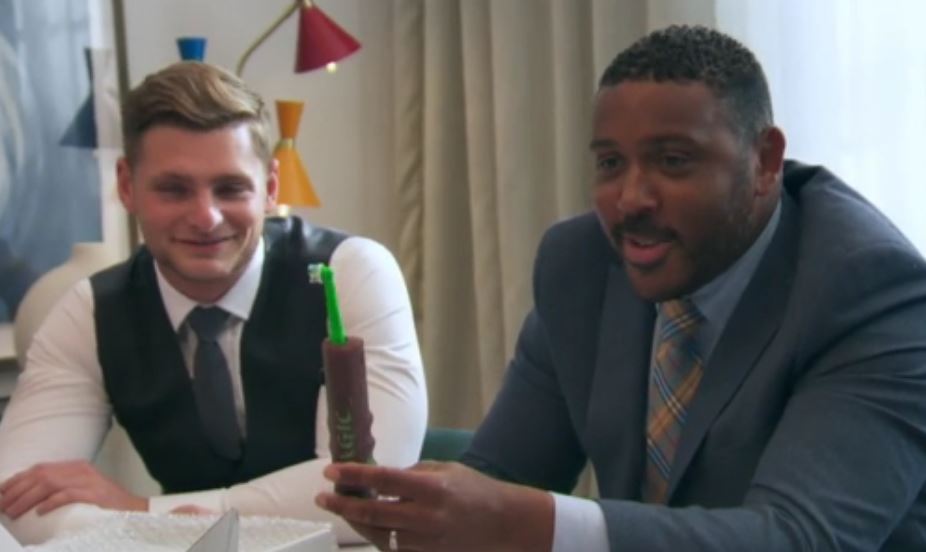 Not another one! (Picture: BBC)

Turds seem to be a running theme in The Apprentice 2022 thus far, with the boys’ team managing to create another product resembling faecal matter.

After designing a logo that looked like a poop in the first episode of the series, the second instalment delivered yet another gem, only this time it was a brown electric toothbrush that was meant to replicate a wand.

Lord Alan Sugar was so concerned by the state of the electric toothbrush, which he’d challenged both teams to create for six to eight-year-olds, that he told the boys he was considering getting them a psychiatrist ‘because you seem to be obsessed with turds’.

‘This thing looks like it came from Uranus,’ he bantered, after remarking that the girls’ planet-themed toothbrush was from Saturn.

‘The more I look at it, the more embarrassed I get,’ project manager Aaron Willis responded after it was revealed that the boys’ had lost the task for another week running.

‘Quite simply, it’s just not good enough, but not one of you said “Aaron, that is a turd.” I feel like I’ve been fed to the lions in that respect.’

Aaron, who actually responsible for the brown product, decided to bring colleague Connor Gilsenan and Nick Showering back into the boardroom with him.

Last week, Lord Sugar went as far as calling it the boys’ poo logo the ‘worst’ he’d ‘ever seen’.

The Apprentice candidate slams ‘unfair’ Tim Campbell: ‘You weren’t there!’

It was created during a task that saw the apprentices having to design a cruise ship brand with a supporting advertising campaign which they then pitched to the big wigs of the travel industry.

Will next week’s episode feature more stools? Only time will tell…

The Apprentice airs Thursdays at 9pm on BBC One.

GTA 6 will be only Rockstar game this generation claims rumour

Biden on voting rights passage: ‘I’m tired of being quiet!’