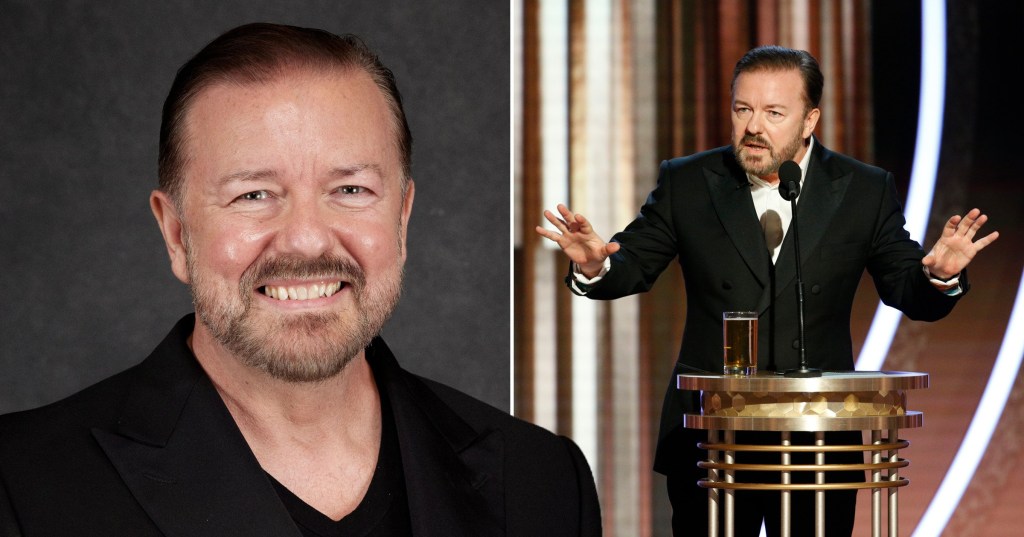 Ricky Gervais has revealed he has asked the Golden Globes organisers not to ask him to host the show again because he’s not sure he wouldn’t give in and go back.

The comedian, 60, revealed that he wants the 2020 Golden Globes to definitely be the last time he hosts the show after having done it five times already.

Speaking to Ladbible at a junket for After Life, Ricky revealed why he was ending the series after the third and final instalment, and why he’d quit the awards show.

He explained: ‘It is probably 99 percent sure – never say never – listen, I could be persuaded for both. I don’t know what’s going to happen in the future, the Golden Globes could offer me 10 million for 10 minutes work and I’d be an idiot not to, I’d be a liar to say I wouldn’t consider it.

‘But at the moment, given I’ve done it five times, it got better and better for me and I enjoyed them all but I’m planning never to do it again.

‘I’ve asked them not to ask me because I can be persuaded. That’s true, it’s not a principle but with [After Life], again, it seems odd to end it at its peak, everyone loves it, the money goes up.’

Ricky has ended After Life with season three (Picture: After Life)

Revealing why he is so adamant to end After Life, Ricky explained: ‘I think you’ve got to move on, you’ve got to leave it somewhere and I’d kick myself if I did a fourth series for squillions and it wasn’t as good as the third.’

Ricky recently admitted that he believes his time hosting the awards show was so successful because people are sick of ‘virtue signalling celebrities’.

He told The Sun: ‘With all of the austerity and people struggling, they think “why are these people lecturing me? They’re going to an awards ceremony in a limo and are telling me to recycle?”

‘The people with nothing became tired of being lectured by people who had everything.’

MORE : Ricky Gervais thinks people are sick of ‘virtue signalling’ celebrities who ‘have everything’ lecturing them

20 Monday morning motivation quotes to give you a boost

Concerned Dr Hilary Jones warns against lifting Covid restrictions: ‘It would be a mistake’