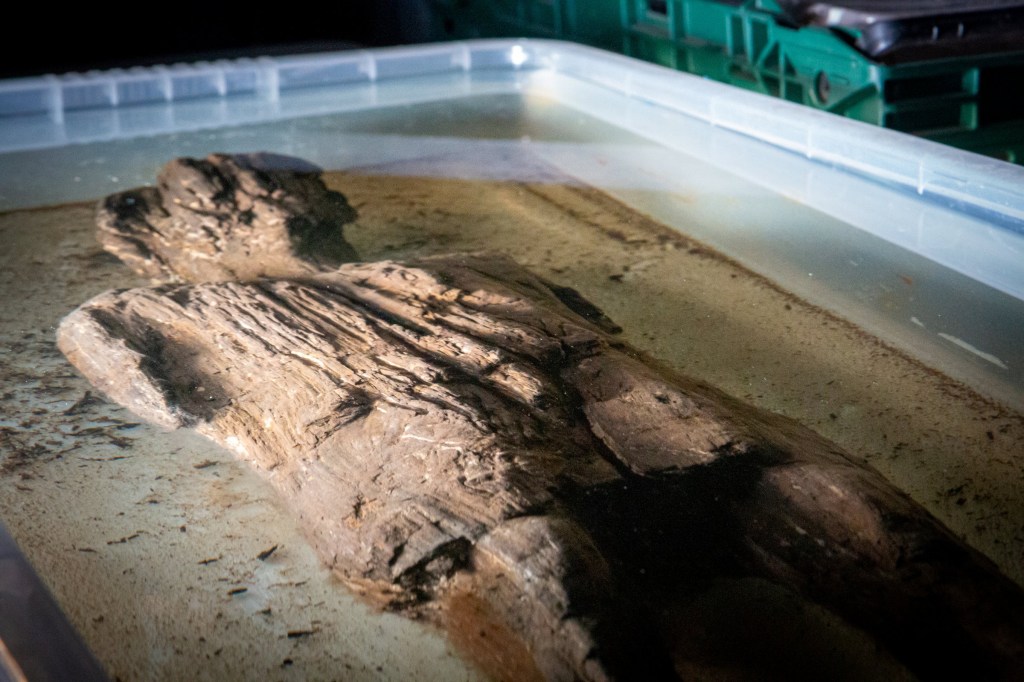 A Roman wooden carved figure has been discovered in a waterlogged ditch during work on the HS2 project.

The model, cut from a single piece of wood, 67cm tall and 18cm wide, was found by archaeologists in a Roman ditch in a field in Twyford, Buckinghamshire, in July 2021.

The discovery was made by experts from Infra Archaeology, working for HS2’s contractor Fusion JV.

The style of the carving and the tunic-like clothing suggest the figure could date from the early Roman period almost 2,000 years ago.

A lack of oxygen in the water-logged clay fill ditch helped prevent the wood from rotting and ensured its survival over the centuries.

Mr Williamson from Fusion JV said: ‘The preservation of details carved into the wood, such as the hair and tunic, really start to bring the individual depicted to life.

‘Not only is the survival of a wooden figure like this extremely rare for the Roman period in Britain, but it also raises new questions about this site.

‘Who does the wooden figure represent, what was it used for, and why was it significant to the people living in this part of Buckinghamshire during the first century AD?’

The carved human-like figure – thought to date back almost two millenniums – has astounded experts due to its excellent preservation. (Credits: HS2 / SWNS)

The figure is in good condition but the arms below the elbows and feet have degraded.

Its hat and hairstyle are among the surprising amount of detail which can still be seen.

The head is slightly turned to the left, the tunic at the front seems to be gathered at the waist going down to above knee level, and the legs and shape of the calf muscles are defined.

Shards of pottery dating from 43-70 AD were also discovered in the ditch.

Wooden carved images were offered as gifts to the gods, according to archaeologists, who could not be certain about the figure’s intended use.

A small broken fragment is being sent for radiocarbon dating to try and get an accurate age for the wood, while tests are also being carried out to try and find out where it came from.

Helen Wass, head of heritage at HS2 Ltd, said the archaeology programme on the first phase of the HS2 project between London and Birmingham has provided a wealth of new information about the past.

She said: ‘In Buckinghamshire, our careful work has enabled us to build a much greater understanding of how the landscape was used by our ancestors, especially during the Roman period, and is brought to life further through incredible artefacts like this figure.’

Jim Williams, a senior science advisor for Historic England, said: ‘This is a …read more

How young is too young for a cup of tea? The facts about letting kids have caffeine

Alec Baldwin sued for defamation, by family of slain Marine

History made as Royal Navy appoints its first ever female admiral