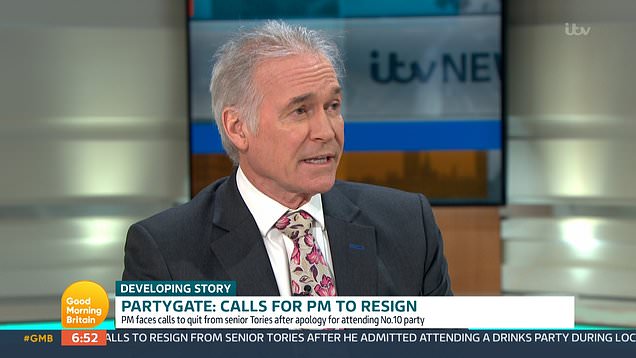 Dr Hilary Jones has warned Boris Johnson he ‘won’t be forgiven’ after confirming he attended a ‘Bring Your Own Booze’ party at Downing Street during the height of the pandemic.

The Prime Minister is currently facing deafening calls to resign, which only got louder after he confirmed during yesterday’s Prime Minister’s Questions that a gathering was held by Tory staff on May 20, 2020 when people were left dying in hospital alone, and loved ones weren’t able to attend their funerals.

Mr Johnson’s ‘apology’ didn’t land with the public, claiming he didn’t realise the do was a party, and now Dr Hilary has given a brutal assessment of the PM’s disastrous testimony.

During today’s Good Morning Britain, host Kate Garraway said NHS staff will be feeling the anguish of Mr Johnson’s betrayal more than most after losing colleagues to the virus and watching patients die alone following the rules.

‘I think the Prime Minister will be forgiven for raising taxes, for affecting benefits, but he’ll never be forgiven for the emotional trauma of those people who lost loved ones.’

‘Boris Johnson will never be forgiven for this’ (Picture: ITV)

‘And we saw the Prime Minister in hospitals not wearing masks and talking to nurses,’ he continued.

‘It’s constantly everyone else must do this, but I don’t.’

Opening yesterday’s PMQs, Mr Johnson apologised for attending the Downing Street garden party, but claimed he was under the impression it would be classed as a work event under the rules that he set.

Labour leader Sir Keir Starmer said ‘the party is over’ and called on him to resign.

He said: ‘That code says ministers who knowingly mislead parliament will be expected to offer their resignation.

‘The party’s over, prime minister. The only question is will the British public kick him out, will his party kick him out or will he do the decent thing and resign?’

Even Conservative MPs are now openly calling for Mr Johnson’s resignation as Labour leaps ahead by 10 points in the polls.

Good Morning Britain airs weekdays at 6am on ITV.

Stock Market: Suez Canal Update! Floating!
Hedgelaying is the unexpected way you can help nature – here’s how to do it