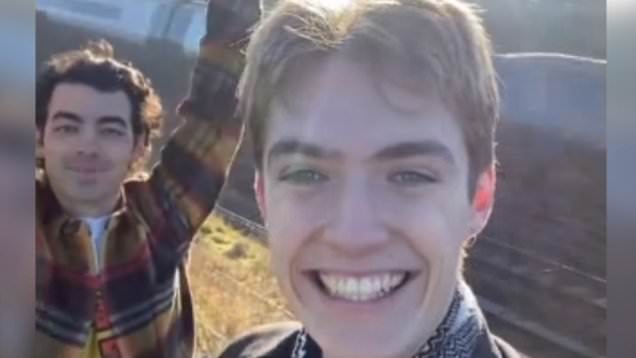 Francis Bourgeois is one of the most notable viral stars on TikTok, and he’s now picking up some celebrity friends, including the one and only Joe Jonas.

For over a year now, Francis has been spreading absolute joy with his social media clips, mainly videos of him buzzing over trains. He’s amassed a massive following of 2 million and has over 34 million likes on the platform.

The trainspotter uses a fish-eye camera to film his own face as he goes trainspotting across England, leading to countless reaction images and a genuine, pure outpouring of love for Francis and his wholesome hobby.

Francis has even inspired other people to take up trainspotting, including, it seems, Jonas Brothers star Joe.

The social media star took to Instagram where he shared a short clip of him waving at a passing train (though not with his fish-eye camera) – a very normal clip so far, and one you’d expect from the trainspotter.

Until, seconds later, he turns around to show that his companion is none other than the former Disney star.

(And just in case you thought you were surely seeing things, Francis handily tagged Joe in the video, proving it is, genuinely, actually, Joe Jonas.)

Francis picked up a new friend for trainspotting in the form of none other than Joe Jonas (Picture: Instagram)

Joe himself also put a short video on his own Instagram Stories, starting with a close-up of a train pin on Francis’ shirt before moving out and showing the viral star standing in the British countryside and waving slightly awkwardly.

He captioned it: ‘Train spotting with the legend @francis_bourgeois43’.

The absolutely random coupling has been making waves on social media, with reactions hovering around the ‘WTF?’ mark, but in, like, a nice way.

Sharing a still of the new video, one person wrote: ‘i know there’s been a lot of bad news lately / today but joe jonas and francis went trainspotting together so cling to that joy my friends (sic)’.

Fans were shocked to see Francis and Joe hanging out and watching trains (Picture: FilmMagic)

Another wrote more simply: ‘nah fuxk off not francis bourgeois hanging out with joe jonas (sic)’, along with multiple crying emojis.

‘Joe Jonas hanging out with Francis Bourgeois was not on my 2022 bingo card,’ one Twitter user remarked, while another said: ‘some things you just can’t predict can you’.

as if joe jonas has gone trainspotting with francis ???? some things you just can’t predict can you pic.twitter.com/B3au8do6yL

Joe Jonas hanging out with Francis Bourgeois was not on my 2022 bingo card pic.twitter.com/Au0n8pDvX3