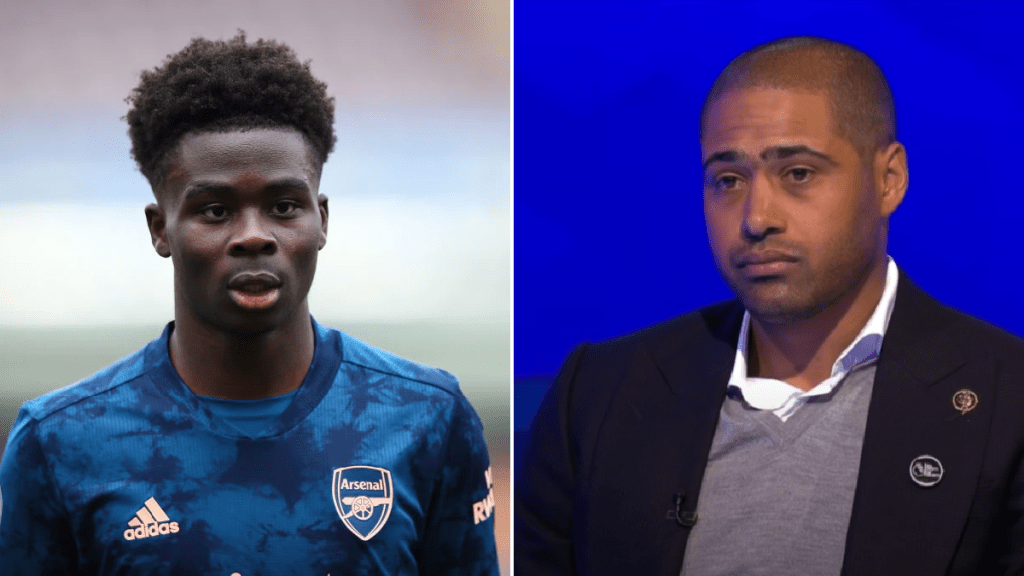 Arsenal’s Bukayo Saka has been linked with a move to Liverpool (Pictures: Getty/Sky Sports)

Former England defender Glen Johnson has urged Bukayo Saka to consider joining Arsenal’s Premier League rivals Liverpool and says a move to Anfield would suit him ‘down to the ground’.

Recent reports have linked Arsenal and England star Saka, 20, with a stunning move to Liverpool.

Saka has established himself as one of Arsenal’s most important players over the past three seasons and Liverpool boss Jurgen Klopp is believed to be an admirer of the forward.

Johnson understands why Liverpool may try to target Saka and believes the player would be ‘interested’ in the transfer, although he doubts whether the Premier League rivals would be able to agree a deal.

‘I do think it’ll be an expensive transfer to pull off because Arsenal wouldn’t want to sell one of their best players to a rival,’ he told BettingOdds.com.

‘As he’s a fantastic player, a young player and English then it would have to be a big deal.

‘In terms of Liverpool and the player being interested in a move then I believe that for sure but I just think it would be quite a complex deal to pull off.

Jurgen Klopp is said to be interested in signing Saka (Picture: Getty)

‘I do think it would be a good move for Saka because any chance you get to sign for one of the best teams around, as a young player, it’s going to be appealing.

‘I think the way that Liverpool play will suit him down to the ground.’

Saka is enjoying another productive season at the Emirates Stadium, scoring seven goals and providing four assists to help Arsenal climb to fourth in the Premier League.

The Gunners recently suffered a shock defeat to Championship club Nottingham Forest in the third round of the FA Cup, however, with Mikel Arteta admitting he was ‘really hurting’ after the 1-0 loss.

Hollyoaks boss reveals challenges of choosing who dies in the stunt

The Apprentice 2022: Lord Alan Sugar concerned as boys’ team manage to create another turd-like product second week in a row