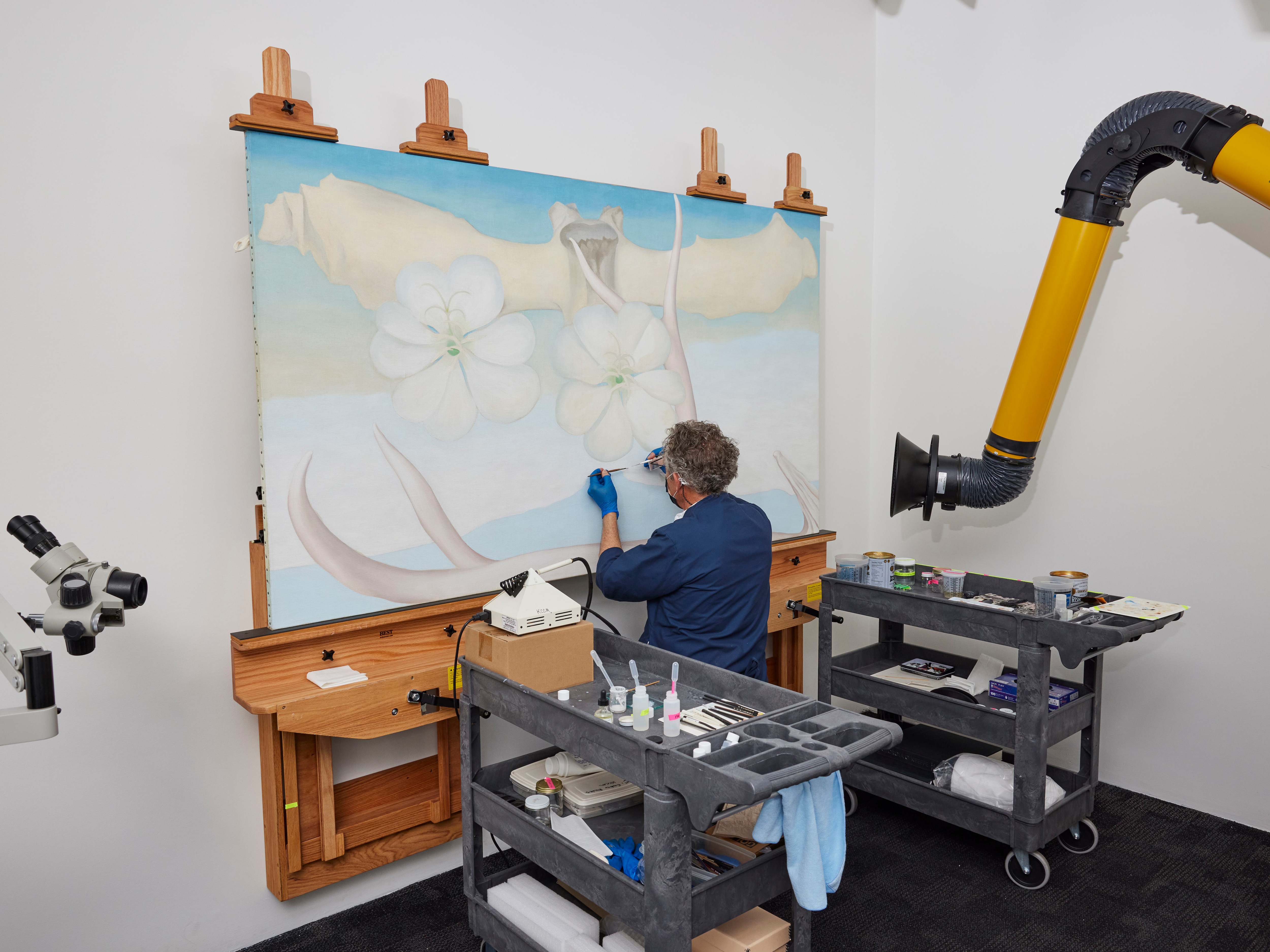 A damaged Georgia O’Keeffe painting is back on display after conservators spent 1,250 hours and $145,000 restoring it.

Dale Kronkright, head of conservation at the Georgia O’Keeffe Museum in Santa Fe, called the job the most massive restoration project he has ever worked on.

The results will be on display at the museum through Oct. 10. The painting will then travel to the San Diego Museum of Art in 2023.

The late American modernist artist painted the piece, titled “Spring,” in 1948. It was last seen by the public in 2019, the Albuquerque Journal reported.

The painting combines such O’Keeffe trademarks as desert primroses, a large vertebra and the northern New Mexico mountain peak named Pedernal. Measuring about 4 by 7 feet (1.2 by 2.1 meters), it was the largest canvas the artist had painted up to that point.

The water damage likely was caused by a tarantula tunneling through the roof at the artist’s 18th century adobe home in Abiquiú, in northern New Mexico.

Conservators had to repair not only the water damage but previous restoration work that had failed. The artwork also had been varnished, a process no longer used in conservation.

“The damage is consistent with it being stacked against another painting,” Kronkright said. “It’s clear at some point that it was sanded. It was almost as if the paint had been pulled off.”

O’Keeffe Museum Curator Ariel Plotek said the work feels like a statement about a new chapter in the artist’s life. The painting of “Spring” coincided with O’Keeffe’s return from New York — where she spent three years settling the estate of her late husband, Alfred Stieglitz — and the remodeling of her New Mexico home.

“The primrose is associated with mourning; the bones are connected to death. It’s interpreted as kind of a memorial to Alfred Stieglitz,” Plotek said.

Plotek said the fact that O’Keeffe kept the painting for several decades shows it was important to her.

In letters to her New York gallerist, Edith Halpert, O’Keeffe wrote that she didn’t know if anyone else would like it.

After the water damage, O’Keeffe sent “Spring” to her personal conservator in New York, calling it “unmanageable and hard to clean.” It was restretched and cleaned. Ultraviolet light showed large sponge marks on the painting, likely attempts by the artist to clean it, Kronkright said.

The museum acquired the painting when it opened in 1997.

A $75,000 Bank of America grant funded part of the restoration work, while the museum’s operating budget paid for the rest.