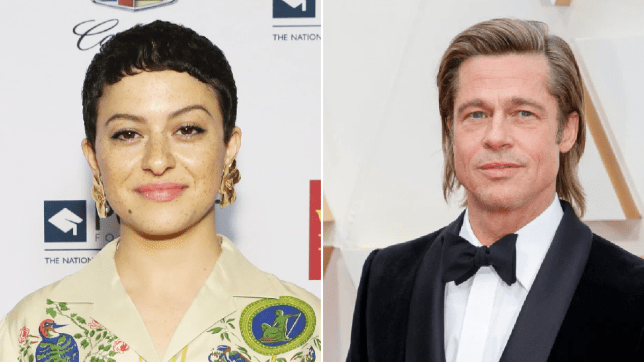 Alia says Brad was completely oblivious to the rumours they were dating (Picture: Getty)

Brad Pitt has been romantically linked to so many women in the spotlight that he had no idea he was rumoured to be dating friend Alia Shawkat.

Rumours that Alia, 32, and Brad, 58, were secretly dating emerged after they were spotted hanging out together in 2019 and 2020.

Arrested Development actress Alia eventually denied the rumours but it seems Brad was completely oblivious to the speculation.

Opening up about the rumours, Alia told The New Yorker: ‘[Brad] had no awareness of it at all.

‘Which is so funny… I was like, “You know everyone thinks we’re dating? And there’s this whole thing, and I’m being followed”.

Alia may have wanted the rumours to die down but her grandmother was rather hilariously loving the attention on the actress.

Alia recalls her grandmother loving the attention on her (Picture: Getty Images)

‘She’s sitting there, watching her Turkish soap opera. And next to her is this old gossip magazine with Brad’s face, and my face in a small circle. And it says, “Brad’s New Girl!”’ Alia recalled.

‘I looked at my grandmother, like, “Why do you have this?” She’s, like, “It’s you and this movie star! And it’s your face”. I was embarrassed by it. I told her she had to throw it away. And she laughed.’

Brad pretty much lives in his own little Hollywood bubble (Picture: Getty Images)

One aspect that Alia didn’t enjoy about the attention was that it was on her personal life rather than professional achievements.

She explained: ‘There’s something ironic about it. It has nothing to do with Brad as a person—he’s a great f** guy.

‘But of course, the idea of me being romantically involved with an older white guy is what gets me the most attention. Not a 20-year career. That’s what gets me.’

Golden Globes 2022: Jamie Lee Curtis the only celebrity who showed up

Addressing the claims in June 2020, Alia said that she and Brad were ‘just friends’ while describing the buzz as ‘overwhelming’.

World War Z actor Brad previously said he doesn’t pay attention to the speculation about his dating life, one telling the New York Times Magazine: ‘I don’t know how many women they’ve said I’ve been dating the last two or three years, and none of it’s true.’

Tiny one-bed flat that looks like a shed from the outside is on the market for £430,000

Emmerdale spoilers: Meena exits amid unexpected twist in the ending