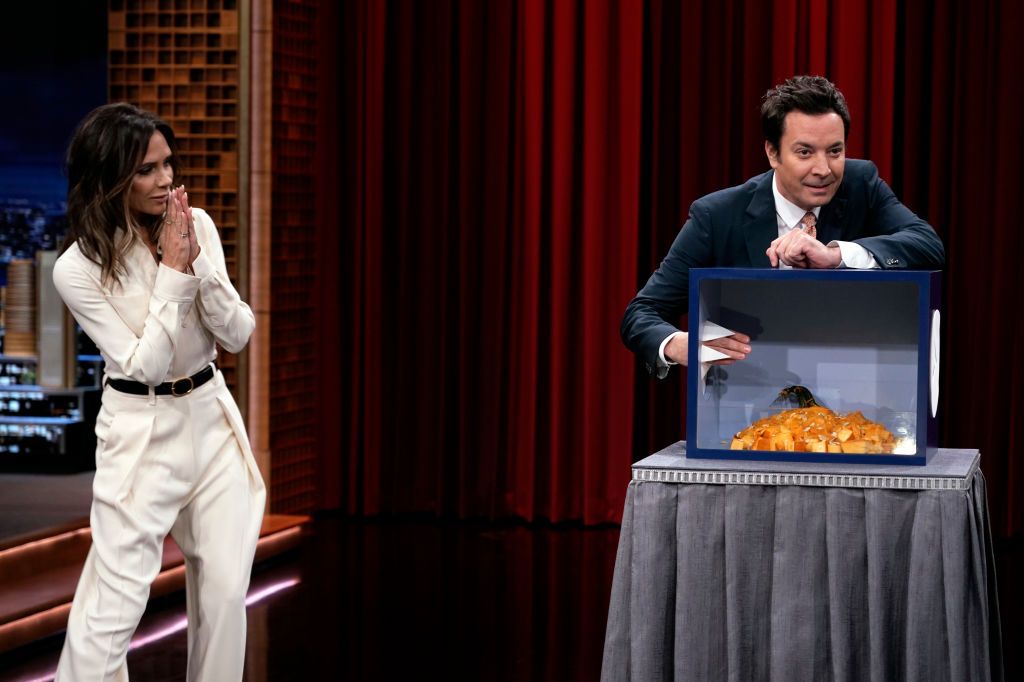 Victoria Beckham completely freaks out as she was made to feel mystery objects during her appearance on Wednesday’s The Tonight Show starring Jimmy Fallon.

The former Spice Girl was visibly shaking with fear as she became the latest celebrity to take part in the Can You Feel It? challenge.

This time around, the hidden items were given a Halloween theme and that left both Jimmy and his guest feeling even more apprehensive as they placed their hands into the box.

Indeed, Victoria claimed she was more nervous playing than she was performing in front of 90,000 people at Wembley Stadium.

Jimmy’s first box was filled with pumpkin guts before he failed to guess eggs and hair in another box.

Victoria, 47, struggled to even touch the mystery items as she slowly put her super shaky hands into the box.

Victoria Beckham and host Jimmy Fallon shrieked their way through a game of Can You Feel It? on The Tonight Show (Picture: Sean Gallagher/NBC/NBCU Photo Bank via Getty Images)

‘Oh my God, this is horrific!’ VB screamed as the crowd attempted to cheer her on.

In her defense, her first item was pretty hard to guess seeing as it was a replica of the Squid Game doll’s head on a rotating stand.

The 53-year-old presenter and VB continued to squeal their way through the segment which ended with the pair putting their hands into a box that had a real man wearing a Michael Myers from Halloween Kills mask.

The terrified host ran off the stage when the guy poked him with his knife, while Victoria continued to shout in terror from behind the box.

The fashion designer shrieked: ‘Oh my god! Is it real? That is quite a scare!’

Elsewhere on the show, the Victoria Beckham Beauty founder discussed both herself and her husband David Beckham’s fashion choices in the Nineties.

Everything we know about 1000lb Sisters season three

Reflecting on their many matching outfits, Victoria joked: ‘It just seemed like a really good idea at the time.

‘It really did. I think there was a naïveté then, we didn’t know about fashion. We were just having fun with it.’

She added: ‘We didn’t know about fashion. We were just having fun with it, which to be honest with you, is kind of the way it should be. I really wish I had the courage to do it more now.’

Heartbreak for Nazanin Zaghari-Ratcliffe as she loses latest Iran appeal