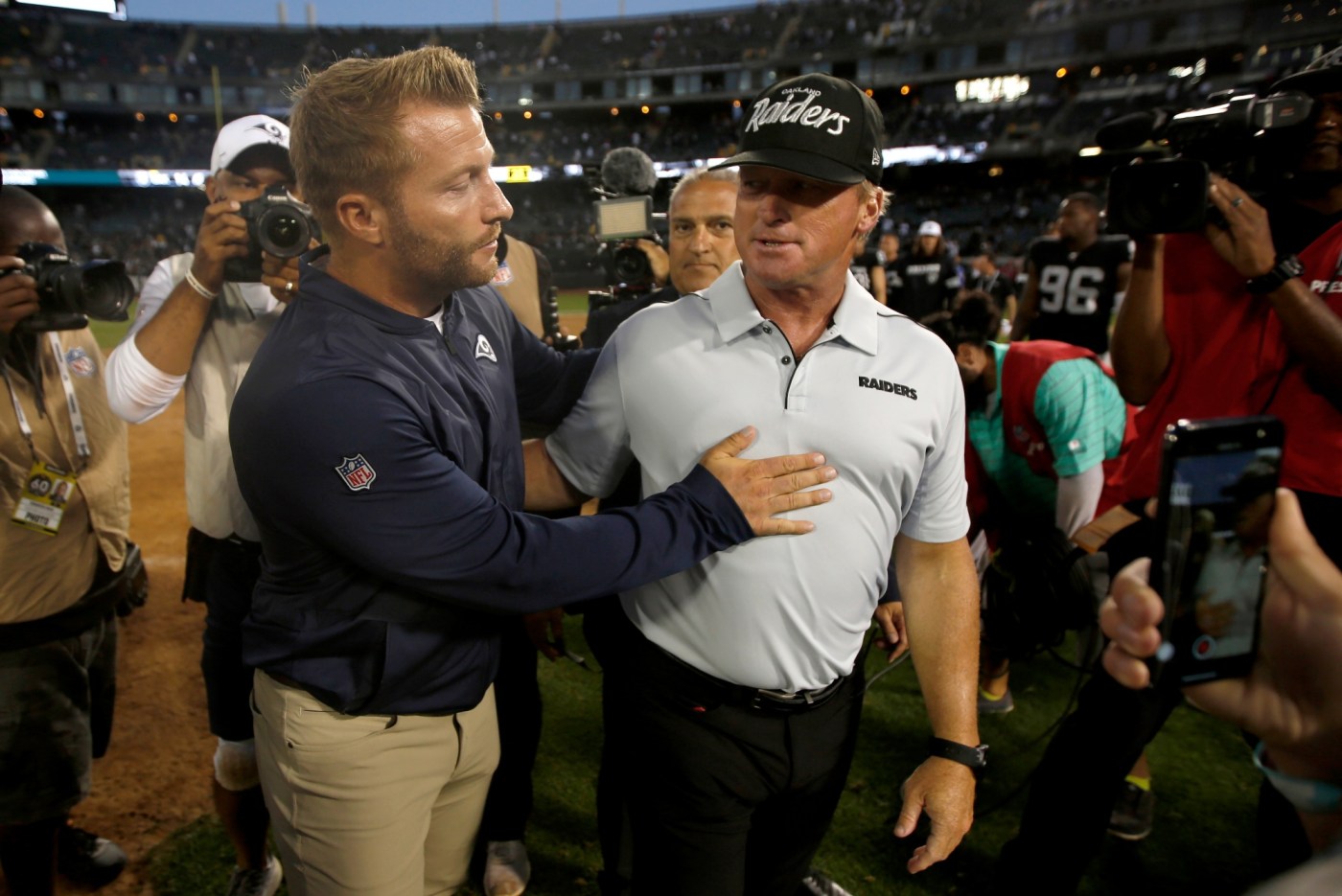 THOUSAND OAKS — Sean McVay has known Jon Gruden for a long time, since before he started his NFL coaching career on Gruden’s staff in Tampa Bay, one of many professional connections between their families going back decades.

But McVay, now the Rams’ coach, says he didn’t know the bigoted side of Gruden revealed in emails made public in the past week.

“I can only speak on my individual interactions with him,” McVay said Wednesday. “But I have not seen that side of him, and I was surprised by that.”

Gruden resigned as the Las Vegas Raiders’ coach Monday night following reports of his use of racist, misogynistic and anti-gay language in emails between 2011 and 2017.

The emails, written when Gruden was between coaching jobs and working as an analyst for ESPN, mostly were exchanged with then-Washington president Bruce Allen. But some involved other associates, including Jim McVay, who ran the Outback Bowl. Jim McVay is Sean McVay’s uncle.

Sean McVay opened his regular pre-practice press conference Wednesday with a statement calling the situation “unfortunate” and expressing sympathy for other Raiders employees and families affected by Gruden’s resignation.

Facing questions, McVay said, “(I’m) just sad about it. It’s unfortunate. I just want to really leave it at that.”

Asked if he was sad about the content of the emails, or sad for Gruden, McVay said it was “all of the above.”

“I’m sad for the many people that have been negatively affected, anybody that was offended by this,” McVay said. “It’s kind of a sad commentary all around, and it’s an unfortunate thing that we’re even talking about it right now.”

Back in 2018, when McVay’s Rams opened the season with a 33-13 victory over Gruden’s then-Oakland Raiders, there was much discussion of their families’ half-century of history and McVay’s Grudenlike vocal mannerisms.

“So much of what I’ve learned about this game has been from his mentorship that he’s provided,” McVay said of Gruden in a 2018 story by ESPN’s Lindsey Thiry.

Gruden talked then about going out of his way in 2008 to hire a then-22-year-old McVay to be the Buccaneers’ assistant wide receivers coach.

The football-immersed families had been connected since McVay’s grandfather John coached Dayton and hired Gruden’s father Jim for his staff in the 1960s, and continued when McVay’s father Tim played defensive back and Jim Gruden was on the staff at Indiana in the ’70s and when John McVay was an executive and Jon Gruden a green assistant coach with the 49ers in the ’90s.

After his Tampa Bay stint, McVay was the offensive coordinator in Washington under Jay Gruden, Jon’s brother, from 2014-16.

McVay said Wednesday he wasn’t contacted by NFL investigators, even though his Washington tenure fell during the period of the Gruden emails. McVay said …read more

Dear Abby: My neighbors’ scrutiny makes it uncomfortable for me to be outside

Dear Abby: She lifted my husband’s kilt, and he got in trouble