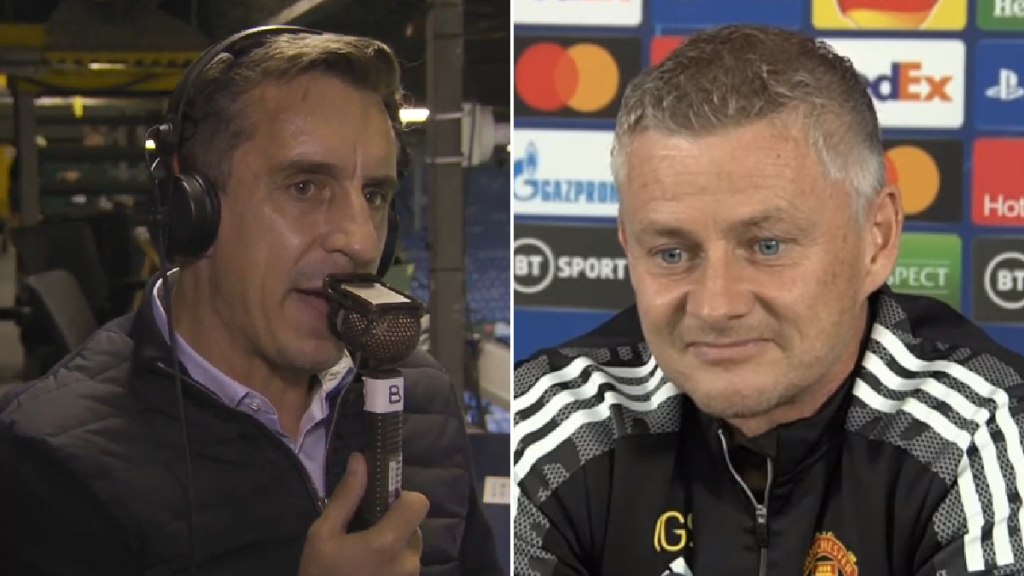 Gary Neville insists Manchester United’s performances must improve and Ole Gunnar Solskjaer needs to deliver a trophy with Cristiano Ronaldo now in his side.

The Norwegian is yet to win silverware since taking over at the helm in 2018 and many feel this season could be his last chance.

Having signed Raphael Varane, Jadon Sancho and Ronaldo in the summer, Solskjaer now has a stronger squad at his disposal that should be challenging for the title.

Neville feels for now United have made the right decision to stick by the former striker.

‘If Ole had been the manager in the post Sir Alex Ferguson slip stream he’d be gone by now,’ Neville told Sky Sports.

‘But because of those bad experiences that United have had through getting rid of managers after a year, two years, eight months, they’re going to live with him and believe in the project for a longer period and I think probably it’s the right way to go because they’ve had bad experiences through changing managers.

Despite only losing once in the league this season, United’s performances have been well below par on occasions with the likes of Ronaldo bagging late goals to spare Solskjaer’s blushes.

And Neville believes there’s two factors Solskjaer must take into account if he is to improve things at Old Trafford.

‘What I do think now, three years in, this is his third full season… performance has to improve,’ he added.

‘So the problems that Ole has got at the moment is Ronaldo coming means it’s make or break.

‘Second thing is the performances are poor. You [Paul Scholes] have said the last couple of games… I don’t think they’ve even played well enough a lot of the games they’ve won.

‘The performance levels, if you watch all the top teams, City, Liverpool, Chelsea. I disagree with Scholesy, I do think Chelsea will challenge for the title.’

United return to action with a trip to Leicester on Saturday.

Police officer boasted about sex with boy, 14, to undercover colleague