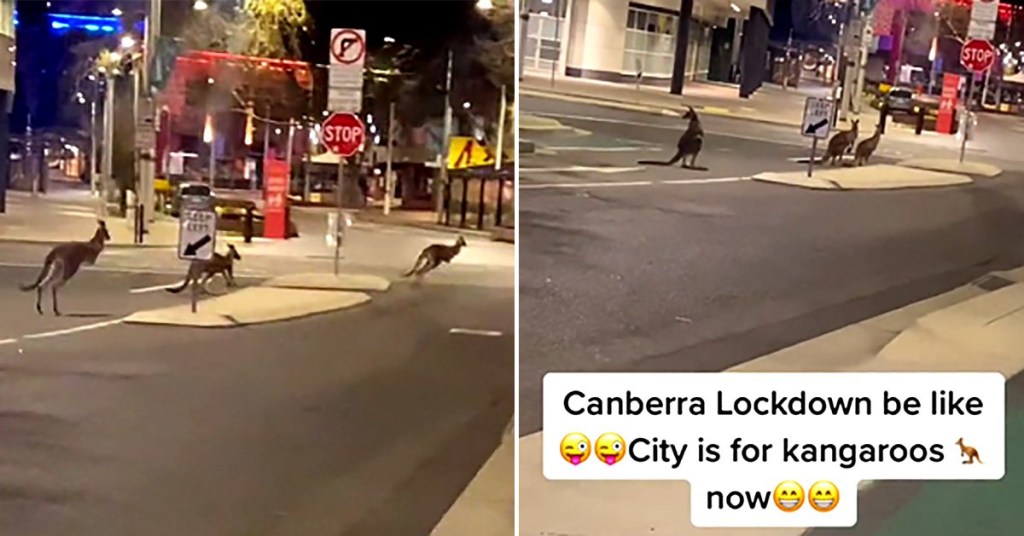 Kangaroos have been seen hopping down the road in Australia’s capital city while it is in lockdown due to Covid.

The mob were spotted taking over Canberra’s central district at night while the streets were eerily quiet with everyone told to stay at home.

Sightings of kangaroos in the city centre have become more common during the city’s mammoth two month shut-down, which ends this week.

Footage posted on TikTok in September showed three roos bopping along the road before respectfully waiting at a stop sign.

It was captioned: ‘Canberra lockdown be like, city is for kangaroos now.’

Australia is in the grip of a third wave of infections fuelled by the Delta variant that has hit Sydney and Melbourne as well as Canberra.

The city’s 400,000 residents will exit lockdown on Friday as the first-dose vaccination rate topped 95%, one of the highest among Australia’s regional capitals.

Canberra residents stuck at home have cheered on the takeover of their city by Australia’s most famous animal.

The roos were making the most of the deserted streets (Picture: Umair Rehmat)

‘The Kangaroos are outside more than the local humans at the moment,’ said one comment.

Another added: ‘It’s amazing how nature is reclaiming itself.’

A kangaroo was also spotted making its way down Mort Street on Saturday, much to the surprise of onlookers.

And one had to be pulled to safety from Lake Burley Griffin after it became stuck in freezing shallow waters – but later had to be put down.

At least some were happy to wait at the stop sign (Picture: Umair Rehmat)

It is not the first time that animals have ventured into places emptied of humans due to lockdowns.

In Wales in March 2020, a herd of goats made headlines after descending from the hills into the deserted town of Llandudno.

Around 120 of the animals entertained bored locals but also helped themselves to a few front garden flower pots while no one was watching.

Even with the Delta outbreaks, Australia has managed to keep its coronavirus numbers relatively low, with some 133,400 cases and 1,478 deaths.

Victoria, which includes Melbourne, suffered the deadliest day of the Delta outbreak on Wednesday with 13 deaths. It reported 1,571 new infections, up from 1,466 on Tuesday.

Stock Market: Suez Canal Update! Floating!
You could land a two-bed house for just £9,000 – but it needs some TLC

From Kris planning a goth wedding to Scott Disick’s inevitable reaction, fans are in their feelings about Kourtney and Travis’s engagement