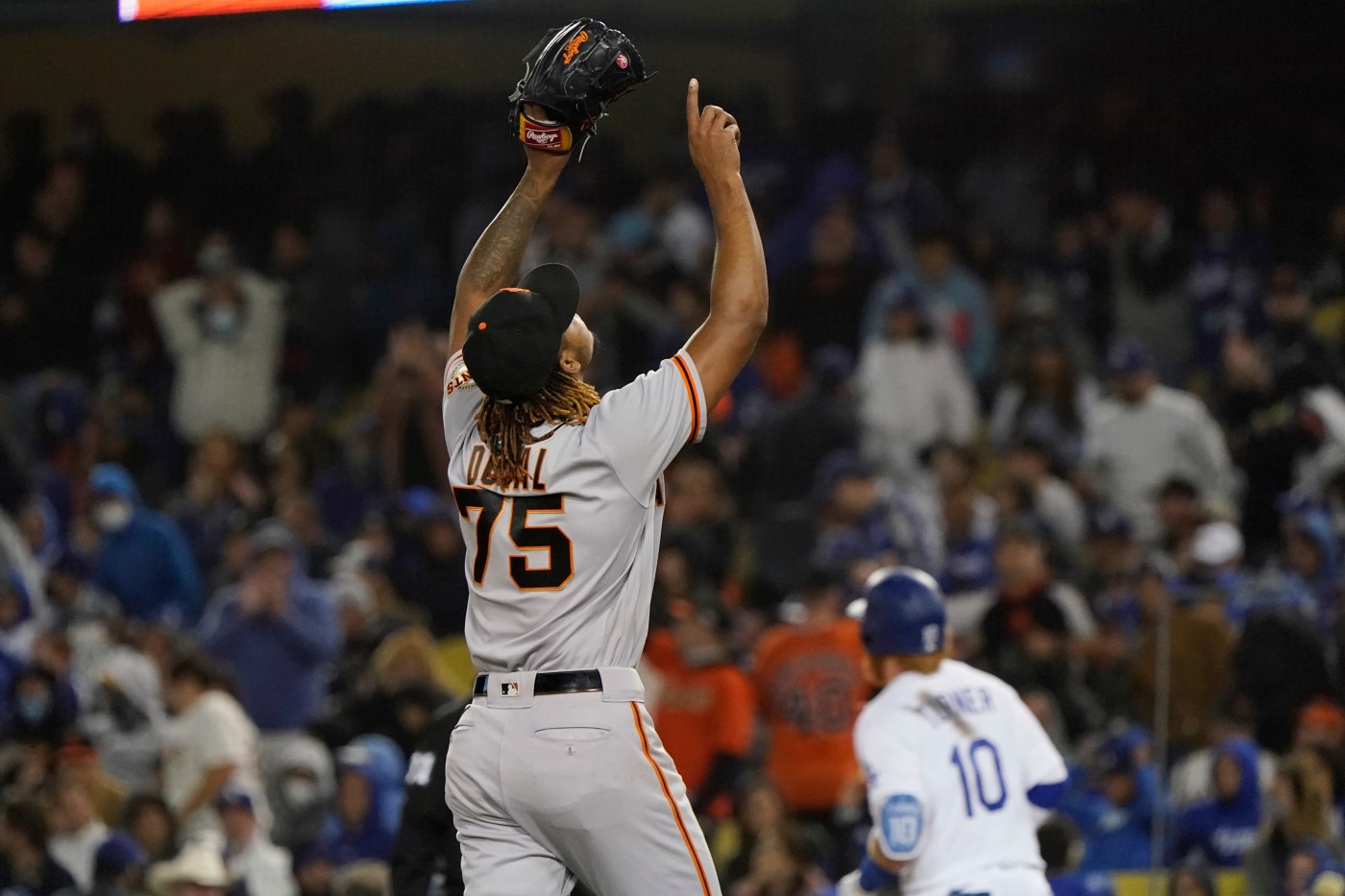 LOS ANGELES — San Francisco Giants rookie reliever Camilo Doval has taken on pressure-cooked situations with ease and poise since his call-up on Sept. 5. He stated his case as one of baseball’s best emerging closer with a record-setting performance on the biggest stage he’s hit yet.

Doval’s save to preserve the Giants’ 1-0 win over the Los Angeles Dodgers on Monday night marked the first time a rookie recorded a two-plus inning save in the postseason without allowing a base runner since saves became an official stat in 1969, according to Stats LLC.

He needed 15 pitches to get through the eighth inning, his fastball touching 100mph a handful of times, to hold off the Dodgers lineup and preserve a one-run lead. He needed just six words to convince manager Gabe Kapler he could pitch the ninth, too.

“I got it papi, I’m ready,” he told Kapler. Though Gavin Lux’s pinch-hit line drive looked like it might tie the game, the winds knocked it right into LaMonte Wade Jr.’s glove to end the game and seal history for Doval.

I feel very proud, very fortunate, and I appreciate the fact that the manager trusts me to pitch in this situation,” Doval said after the game. “As a matter of fact, I really enjoy pitching in these type of games.”

The records didn’t stop there.

Not since Bobby Jenks did it for the Chicago White Sox in the 2005 ALDS has a rookie recorded a six-out save in the postseason. Doval joins an exclusive club of five rookies to record two-plus inning saves in a postseason game since the save stat became official. Including Doval and Jenks, Todd Worrell did it for the St. Louis Cardinals in the 1985 World Series. Two members of the Cincinnati Reds’ Big Red Machine did it, too: Rawly Eastwick in the 1975 NLCS and Don Gullett in the 1970 NLCS.

Doval’s first career postseason save was the second time a 24-year-old recorded a save in the postseason for the Giants since John Antonelli did it in Game 4 of the New York Giants’ sweep of the Cleveland Indians to seal a 1954 World Series title, according to MLB Stats.

Flip-flopping from Triple-A to the big leagues this year, Doval stuck on his fifth call-up in September. Doval did not allow a run in 15 games since Sept. 5th, holding opposing hitters to seven hits, three walks with 20 strikeouts in 14 1/3 innings. Doval won the National League Reliever of the Month honor. He’s showed every indication he had postseason heroics in his DNA.

A look at the values, priorities that have SF Giants on verge of ‘special’ achievement

Can SF Giants prevent Dodgers from another postseason series comeback?

What the Chargers need to address during their bye week

Ask Amy: She’s not the grandmother I want for my kids