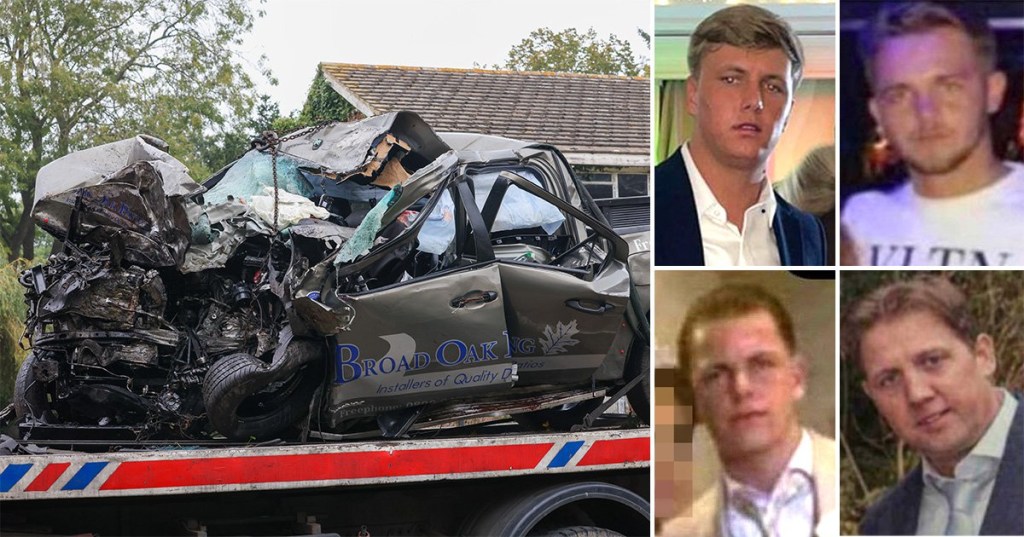 Four victims of the crash died at the scene in Kent (Picture: UKNIP)

Four people killed in a fatal Kent car crash were from the same family and rushing to watch a major boxing match, reports say.

One teenager survived the horror accident in foggy conditions but his relatives, aged 18 to 44, died at the scene, leaving behind a young baby and a pregnant wife.

Jacko is said to have just found out his wife is pregnant, while Johnboy welcomed a child six weeks ago.

Meanwhile, Jerry Cash, 15, has been fighting for his life in hospital ever since the crash in the early hours of Sunday morning, when the group are thought to have been headed to a viewing of Tyson Fury’s fight against Deontay Wilder.

They appear to have veered off a narrow country road and smashed into trees.

Images of the crushed truck show it severely mangled following the collision.

The incident, which happened on Lenham Road, has sparked an outpouring of grief from family members.

One handwritten note photographed at the scene reads: ‘To my baby, I love you so much and your baby Bridie loves you too.’

It is thought to have been left by Johnboy’s wife Grace Cash, and reference their new baby.

A relative at the crash site told the Sun: ‘It was a big shock for all of us. Johnboy had a six-week-old baby. Jacko just found out his wife was having a little kid as well.

‘They were lovely, lovely men and we’ll miss them everyday.

The initials JC were carved into a tree next to a floral tribute (Picture: UKNIP)

‘I found out about an hour after it happened. I couldn’t stop crying. I thought it was a bad dream.’

Mary Cash, mum to two of the boys who died and wife of Jonny, paid tribute to her lost family members, the Mirror reported.

‘Last night my lovely husband and two sons, along with two nephews, went out to watch the Tyson Fury match, like a thousand times they went out before,’ she wrote.

‘Only this time they didn’t come home to us.

The truck the family were travelling in was badly mangled (Picture: UKNIP)

‘My lovely husband and two beautiful babies are gone, just like that, in a blink of an eye my whole world is completely upside down.

‘I’ll never know what I did so wrong in life for god to do this to me.’

One relative made an online plea for help to support teenage survivor Jerry, saying: …read more

Why I will never use dating apps