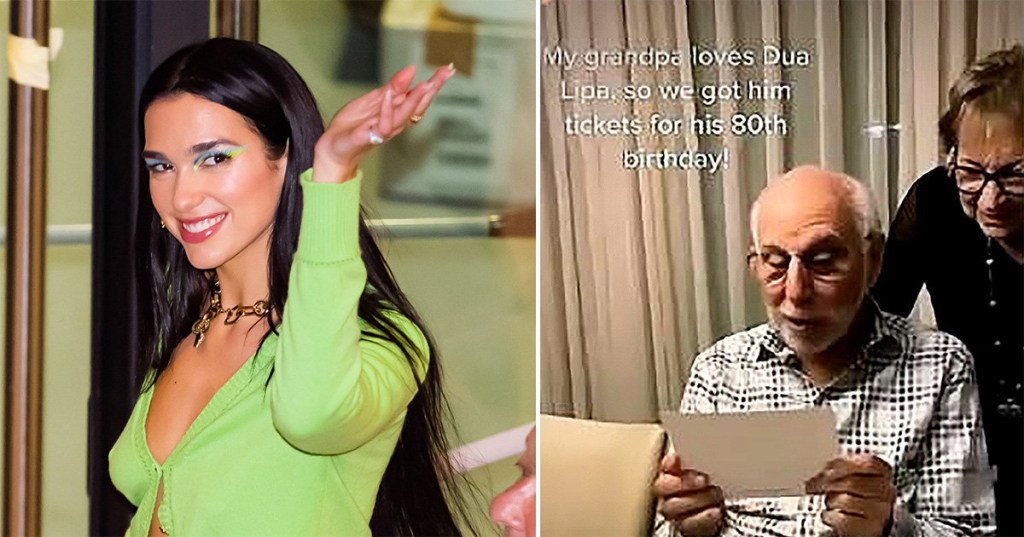 Dua Lipa has reacted to a superfan getting concert tickets for his 80th birthday (Picture: @kadiebernstein)

Dua Lipa has reacted to an incredible viral video of an 80-year-old man being gifted tickets to her concert for his birthday.

The video, posted to TikTok by user @kadiebernstein, has gone viral around the world and has even been noticed by Dua herself.

It shows the moment Kadie’s grandfather Richard, a Dua Lipa fanatic, receives the surprise gift of concert tickets to an upcoming show.

The video explains: ‘My grandpa loves Dua Lipa. So we got him tickets for his 80th birthday!’

At first, Richard looks at the tickets as though he is not quite sure what they are, but then the realisation slowly dawns on him and he screams: ‘DUA LIPA CONCERT!’

Richard’s brilliant, expletive-ridden reaction has been viewed well over 2 million times, with thousands of people reacting in the comments – including the Don’t Stop Now singer herself.

Dua shared the video to her Instagram Stories and wrote ‘OMG THIS MELTS MY HEART!!!’ followed by six heart emojis.

And if Richard’s reaction to getting concert tickets was a sight to behold, his reaction to being noticed by his favourite singer was even sweeter: not knowing how to use Instagram, he says he will have to get Alexa to help him see Dua’s post about him.

‘Isn’t this great? This is amazing,’ he tells his granddaughter.

‘Five minutes of fame and this is the greatest thing that’s ever happened!’

Here’s hoping there’s a third chapter to this story, like Richard meeting Dua in person at the show.

MORE : Tom Daley launching presenting career on The One Show after confirming ambition to ‘take over’ Clare Balding’s job

MORE : Kirsten Dunst on working with ‘masterful’ Jane Campion for Power of the Dog: ‘I just wanted to please her’

Alex Scott tearful as she finds out ancestor owned 26 slaves: ‘That goes against everything I stand for’

Pregnant Louise Thompson forced to ‘live out of her car’ after terrifying house fire: ‘It’s been really tough’