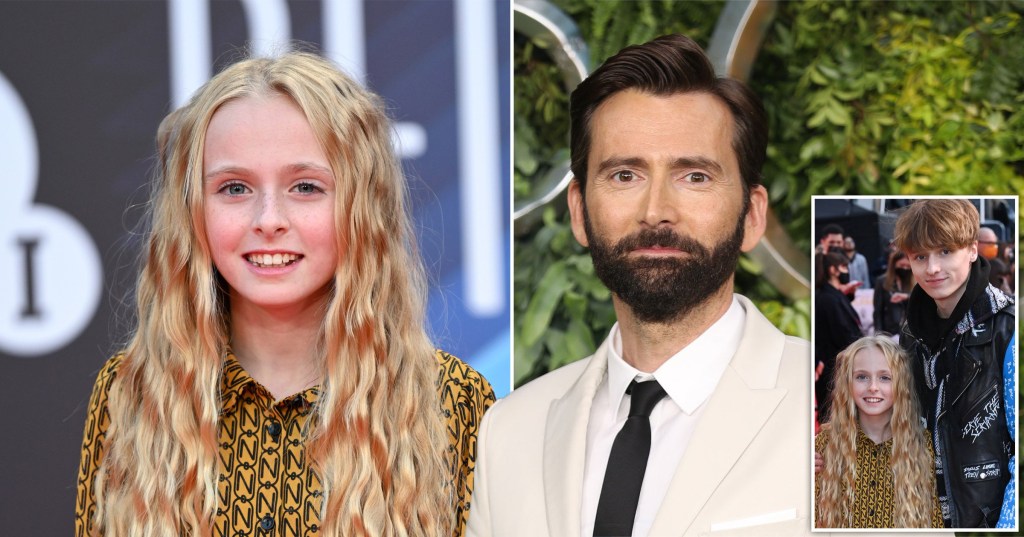 David Tennant’s 10-year-old daughter Olive stole the show at the premiere for Belfast, walking the red carpet with her 19-year-old brother Ty.

Olive, who is set to make her film debut in Jamie Dornan’s latest movie Belfast, looked every inch the professional as she posed for photos with the rest of the actors.

She was seen posing in a yellow patterned dress with her long blonde hair left loose in waves, as big brother Ty put a protective arm around her.

Olive’s mum, Georgia Tennant, 36, shared that she could not be there on the night as she had to quarantine amid the ongoing coronavirus pandemic, but she and dad David, 50, were the proudest parents nonetheless.

Georgia wrote alongside a series of photos of Olive: ‘Oh my darling girl. How proud I am of you & I wish I was there to watch you shine tonight.

‘Instead I leave you in the capable hands of your brother whilst I quarantine miserably at home & continuously refresh @gettyimages like a crazed fan. Which is exactly what I am.’

Earlier in the week, Georgia had shared a photo of her breastfeeding her youngest child while wearing a face mask, and revealed on Tuesday that she was quarantining.

Belfast sees Olive star opposite Jamie in the upcoming movie written and directed by Kenneth Branagh, which is semi-autobiographical about the life of a working-class family and their young son’s life growing up in Belfast, Northern Ireland, during the troubles in the late 1960s.

The film also stars Dame Judi Dench, Ciarán Hinds, and Lara McDonnell, who were all out in force on the red carpet at the London Film Festival premiere.

MORE : David Tennant open to Line of Duty stint as ‘a baddie’ and we can’t think of anything better

Stock Market: Suez Canal Update! Floating!
You could land a two-bed house for just £9,000 – but it needs some TLC