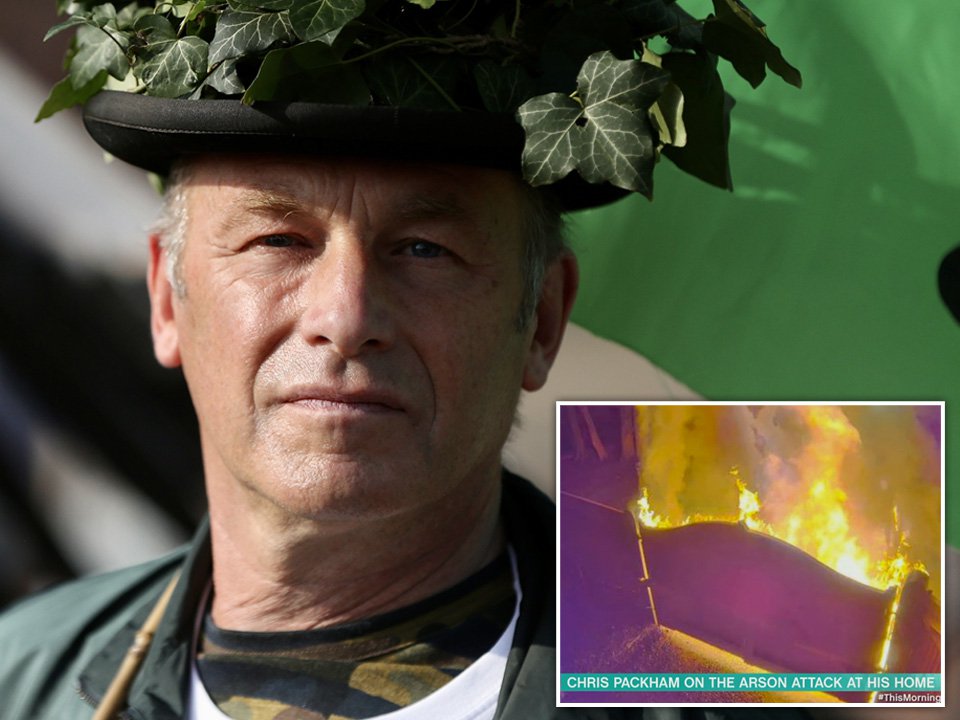 Chris isn’t sure where things will go from here (Picture: Getty / ITV)

Chris Packham has no idea what to expect after thugs blew up a car outside his home over the weekend.

The BBC Springwatch presenter, who was in his house at the time, revealed masked men parked a Range Rover outside his gates and set it on fire in the very early hours of Friday morning and he admitted he and his family fear the situation will escalate.

Appearing on Monday’s episode of This Morning, he said: ‘[My family] are relatively stoic, they’re sticking with my determination to carry on with my campaigning.

‘They understand the nature of these threats, but this is a different type of threat. They’ve now actively and proactively damaged our property with an exploding car.

‘What we wonder is where it goes from here? Is it the house that’s going to be burned down? Are we going to be physically abused? Are they going to damage our vehicles?

‘Ultimately, when people are taking these sorts of actions, you never know when you’re going to stop.’

Police are investigating the incident, and Chris revealed his family are now having to follow ‘practices and protocols’ to try and prevent another attack.

He added: ‘That’s why we have been working so cooperatively and brilliantly with the police.

‘We’re taking on all of their advice and we have certain practices and protocols that we have to do now when it comes to receiving post and so on and so forth.

‘I get up every morning and all I really wanna do is make the world a better place for wildlife and people. I never imagined that having a keen interest in the environment and conservation would lead to this!’

I’m A Celeb 2021: Adam Woodyatt ‘signs up’ to ITV show amid extended break from EastEnders

Chris, who suggested people targeting him might be taking issue with his outspoken stance against fox hunting and other environmental issues, insisted he has no plans to step back as he feels a need to do his bit.

‘What do I do? It’s engrained within me. I love wildlife and have done since I first crawled around our small back garden, he defiantly fired back. ‘The intimidation is not going to work because I just don’t have a choice.’

He explained: ‘I need to know what I am gonna be able to leave a world that stands some chance of becoming more healthy and sustainable and harmonious in the future.’

This Morning airs weekdays at 10am on ITV.

If you’ve got a celebrity story, video or pictures get in touch with the Metro.co.uk entertainment team by emailing us celebtips@metro.co.uk, calling 020 3615 2145 or by visiting …read more

Fertility doctor reveals reason why people are struggling to have babies

Emmerdale spoilers: Meena is caught killing Victoria – is she exposed?