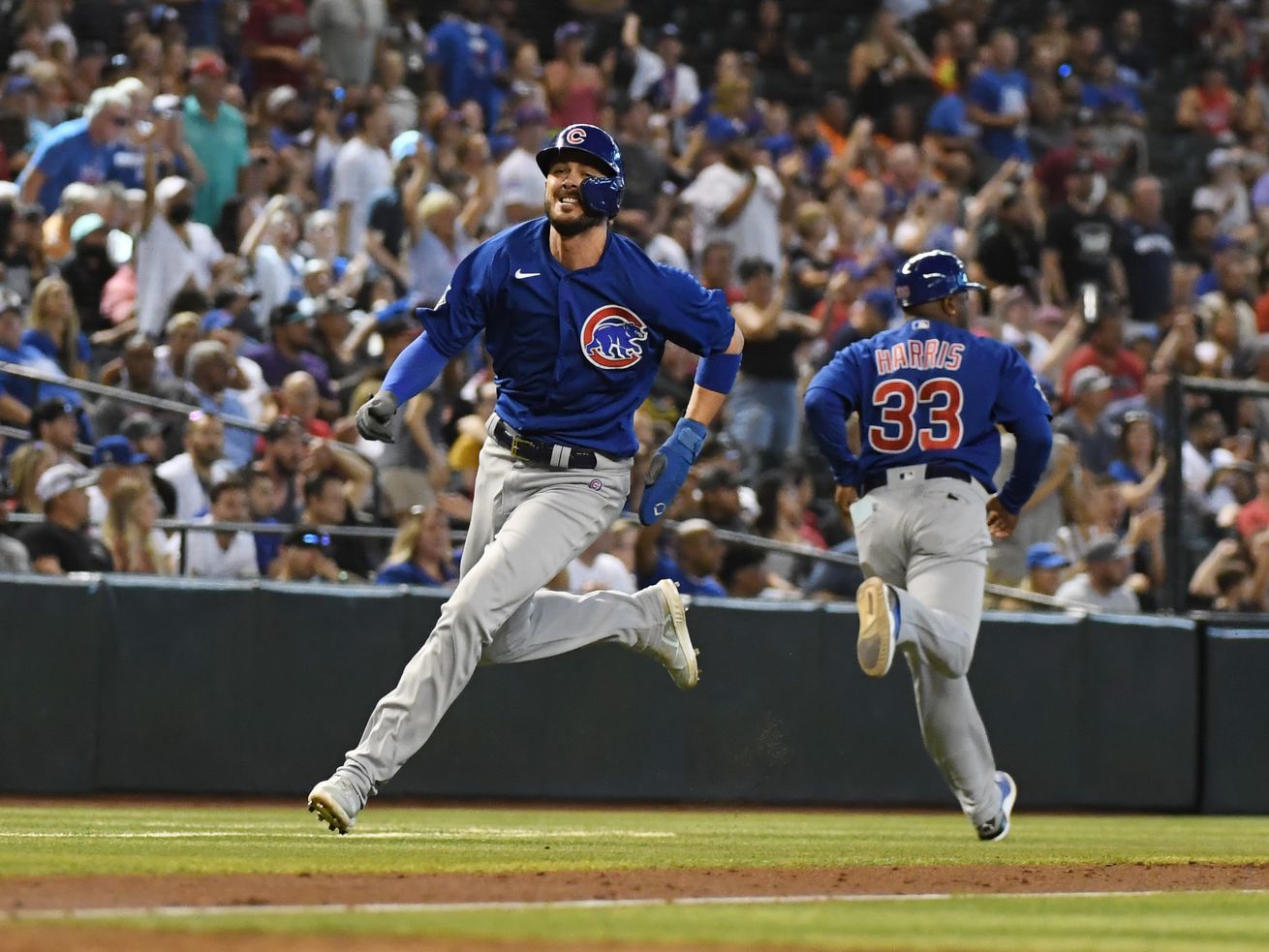 Bryant was not in the starting lineup for Wednesday’s game against the Cardinals.

ST LOUIS – Social media was sent into a frenzy when Kris Bryant was removed from the Cubs’ 7-6 win on Tuesday amid trade speculation. But the Cubs third baseman just left the game with right hamstring fatigue, easing the nerves of fans for the time being.

Bryant was out of the starting lineup on Wednesday, but was feeling good according to manager David Ross both and was available to hit off the bench. Ross is trying to manage Bryant’s workload and after not having much of an All-Star break and talking with the trainers, taking him out of the game to deal with “heavy legs” felt like the right thing to do.

“I just tried to try to listen to that and listen to him and the trainers and that didn’t make a lot of sense [to keep him in],” Ross said. “He told me before the game, the night before I knew a little bit of just some heavy legs and I was mapping out a day off the next day and it just didn’t want a real problem to arise.”

Ortega gets nod in leadoff spot

Rafael Ortega has opened eyes over the last few weeks as his journeyman outfielder has put together some of the Cubs’ best at-bats. Oretga led off on Wednesday against the Cardinals, playing right field.

The Cubs outfielder has been a spark off the bench, going 5-for-12 in pinch-hit opportunities and is hitting .364 with three doubles in July. While Ortega’s at-bats off the bench have provided a boost, Ross has been looking for opportunities to get him into the starting lineup and has gotten his chance in three straight games.

“I was just looking for something different to kind of get the offense just rolling a little earlier. Trying to mix it up,” Ross said. “Willy’s been a really good at-bat. Putting him in the two-hole and pushing everybody back with KB out. Just trying to get a just a different look.”

“You start to bunch all the lefties at the bottom [of the lineup] and it’s a real disadvantage at times when you feel like [you] know where they’re going with how they’re gonna use their bullpen [late in games].”

Infielder Matt Duffy (bulging disc) was with the Cubs on Wednesday in St. Louis after returning from his rehab assignment with Triple-A Iowa. Duffy is expected to be activated from the 60-day injured list on Thursday.

Infielder David Bote ​​(left separated shoulder) did not play in Iowa on Thursday with a scheduled day off, but will play on Thursday. Right-hander Rowan Wick (intercostal injury) struck out two batters in a scoreless inning for High-A South Bend on Wednesday. Wick will have one more appearance in South Bend on Friday before the Cubs evaluate what his next steps are.

Robert Shaw dies at 83; was Chicago alderman, member of Cook County Board of Review

Tokyo Olympics opening ceremony: Why are there two flag bearers for each country this year?