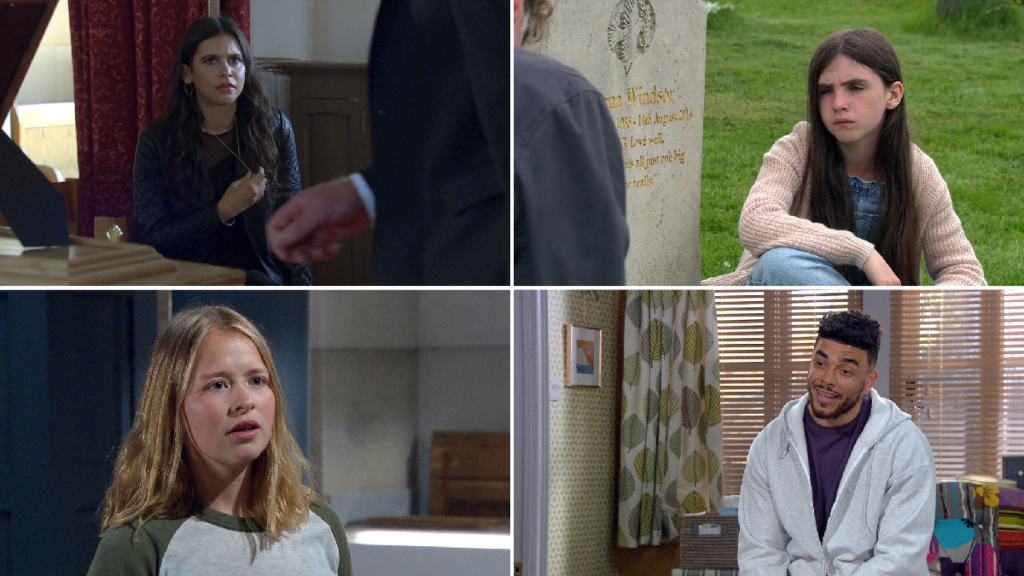 Deceit in the Dales (Picture:ITV)

Sociopath Meena Jutla (Paige Sandhu) is enjoying the aftermath of Leanna’s death in Emmerdale and is brazenly wearing her ring around her neck at the girl’s funeral. But when it slips from her grasp and onto the floor, will suspicions be aroused?

Aaron catches up with Ben. Ben agrees that he needs to collect the rest of his belongings from his dad’s house, but he declines Aaron’s offer to move into Mill, explaining that he can’t live with another alcoholic. Aaron is angry at Liv for ruining things.

Arriving back home to find Liv drinking vodka again, Aaron’s anger rises as he blames her for Ben’s refusal to move in. Drunk and in denial, Liv claims the real reason is Ben isn’t really that into him. Set to explode, how will Aaron respond?

Cathy assures April that she’ll protect her and reckons it’s best for April to keep the bullying secret from Marlon.

Liam won’t engage with Leyla and Jacob over Leanna’s funeral arrangements. He berates Leyla for her and Jacob’s overblown ideas, telling her that he’ll be arranging things himself from now on.

Diane wants revenge for Jamie’s cruelty towards Gabby and she throws his belongings out of the B&B.

Intent on ridding April of the bullies once and for all, Marlon takes her phone and deletes all her social media accounts.

Liam tells Charles that he wants a traditional, dignified and respectful funeral for Leanna and he struggles to contain his anger as a defiant Jacob arrives and joins the meeting.

Liam does his best to continue regardless, but a simmering Jacob is determined and things soon reach a boiling point. Jacob rages about how he knew Leanna better than Liam.

Nate suggests that Tracy visits Vanessa, but she is terrified of looking after Frankie alone.

At Leanna’s funeral, Meena covertly fiddles with Leanna’s ring on her necklace. She panics when the ring falls from the necklace, watching in horror as it rolls and stops near Liam’s shoe.

Jamie lies to Andrea about the reason for his and Kim’s estrangement, but will Kim tell her the truth when she confronts her?

Kim plays Paddy to get her own way.

Victoria and Amy wind Ethan up as they try and coach him for his date.

Multiple people shot on West Side

Best and worst foods to eat during a heatwave

Liverpool stripped of world heritage status because of waterfront development

Nasa’s Perseverance rover begins its search for life on Mars