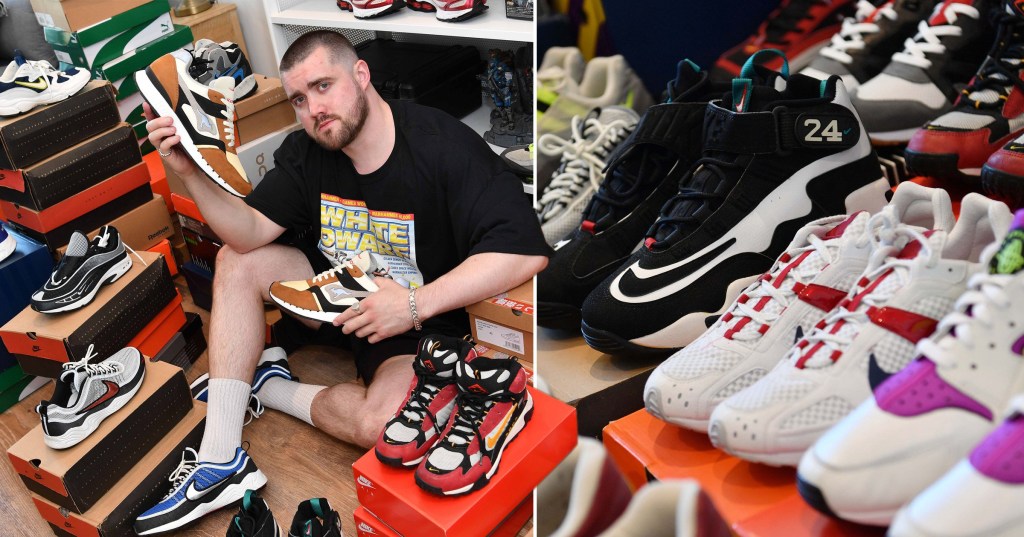 Morgan keeps a selection of his huge collection in his flat (Picture: Surrey Live/BPM Media)

At 12 years old, Morgan Weekes became obsessed with trainers. Now, 18 years on, he has around 800 pairs, worth thousands.

Many of the pairs have never even been worn and are all kept in a special temperature controlled storage unit to ensure they stay pristine.

He said: ‘I get people to look at it like comic books or rare action figures.’

Diagnosed with autism, dyslexia, ADHD, dyspraxia and OCD, he went to The Fordway Centre school in Ashford for children finding it difficult to manage in mainstream education.

The school welcomed pupils from all over the South East and it was there that fashionable footwear first caught Morgan’s eye.

‘We got a lot of kids travelling down from London and they brought the fashion, style and trends with them. It became a thing in the school that everyone had to have the latest trainers or tracksuits. I think that is where it started,’ he recalled

Now, he believes he has one of the biggest collections in the UK.

Morgan said: ‘I have 800 or so pairs spread across a few locations. With new pairs coming in every week. It [the collection] always increases every month.

He now has around 800 pairs and feels his collection is almost complete (Picture: Surrey Live/BPM Media)

‘Right now the storage unit looks like a stockroom in a store, it’s massive and full up to the walls. I tend to collect Nike between 1990 and 2003, they’re my favourite years. That’s what I generally collect but I’ve got every brand under the sun.’

Living in a flat in Woking, Surrey, he tries to keep the number of pairs at home to a minimum.

‘I prefer not to keep too many pairs in my house, if you have too many shoes in one area, there is glue, leather and foam that can create particles in the air, especially as some of the shoes I have are 30 years old – which I’ve never thought is that great for your health,’ he said.

He has 20 pairs available to wear at a time and rotates his favourites, but many of the shoes in his collection have barely been touched.

His oldest pair are from the 1980s while his most expensive are a limited collaboration with McLaren F1 and Asics, given to him by an ex-employee.

Although he doesn’t want to reveal how much the collection is worth, he says he has been offered ‘eye-watering amounts’ for some pairs but he hasn’t been tempted yet.

‘I’ve got the re-release of the Aliens shoes, Reebok Alien Stomper worn by the character Ellen Ripley in the film.

‘I don’t think only Reebok has the original pair used but I’m very happy to own the first proper retro. …read more

Stock Market: Suez Canal Update! Floating!
The Simpsons to have first-ever all-musical episode in season 33 – and it features Kristen Bell

At least 100 U.S. Olympians have not been vaccinated

Spotless ethics needed at the Board of Review