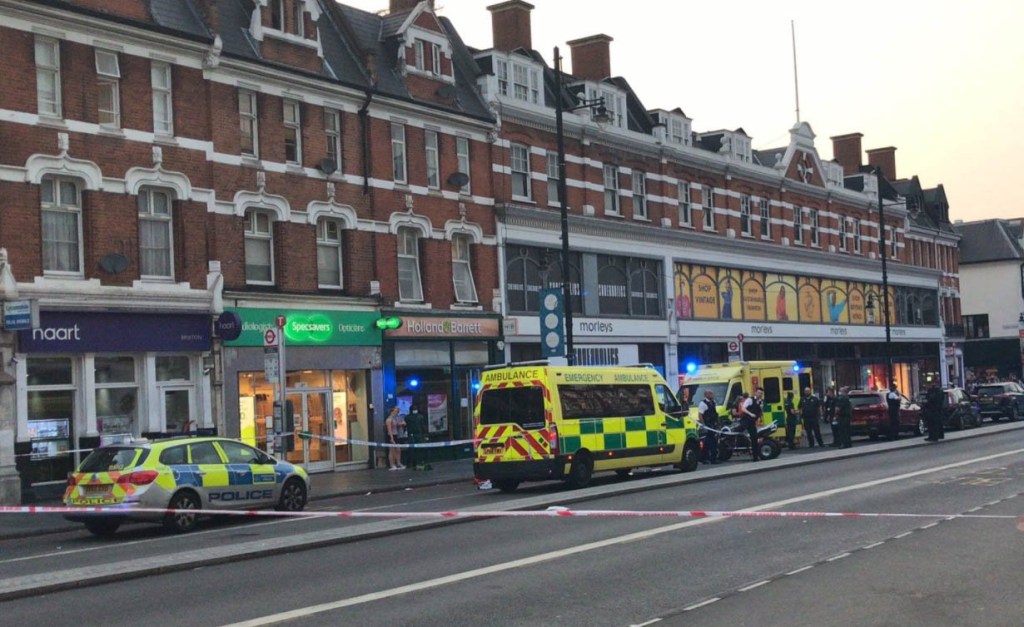 This scene at around 8.30pm this evening (Picture: UKNewsinPictures)

A ‘young lad’ has been stabbed in Brixton this evening, sparking a major police response.

One man who shared a photo of the police cordon close to the tube station on Twitter said: ‘I was walking on the street when it happened. Too distressed to take other pictures. The scene is still there.

‘It happened very quickly. I saw a man lying on the ground with ambulance try to save his life. Then all the police cars coming around.’

Another witness who shared video of crowds in the road next to an ambulance taken from a bus tweeted: ‘Not sure what happened but when I came out of the tube, guys were chasing each other, motorbike in the middle of the street in front of the red Lamborghini, others throwing stuff at a white girl and a black boy on a quad bike that ended up in traffic light.’

BBC news reporter Katharine Carpenter described seeing a ‘major incident’ outside the tube station, with ‘a quad bike on the road and dozens of emergency vehicles’.

The A23 Brixton Road between Brighton Terrace and Ferndale Road was closed in both directions due to the incident, with traffic queuing and people urged to find an alternative route.

A quad bike was seen in the road this evening (Picture: UKNewsinPictures)

A Metropolitan Police spokesman said: ‘Police were called at 20.18pm on Wednesday, 21 July to reports of an assault close to Brixton Underground Station.

‘Officers attended and found a man, believed to be aged in his early 20s, suffering from a stab injury. They immediately provided first aid.

‘The London Ambulance Service and London’s Air Ambulance also attended but despite their efforts the man was pronounced dead at the scene at the 20:45hrs.

‘His next of kin has been informed and are being supported by officers. Formal identification has not taken place.

‘A post-mortem examination will be held in due course.

‘A man was arrested nearby on suspicion of causing grievous bodily harm.

‘A crime scene remains in place and enquiries continue.

‘Detectives from the Specialist Crime Command have been informed.’

Inter tell Chelsea that Romelu Lukaku is not for sale