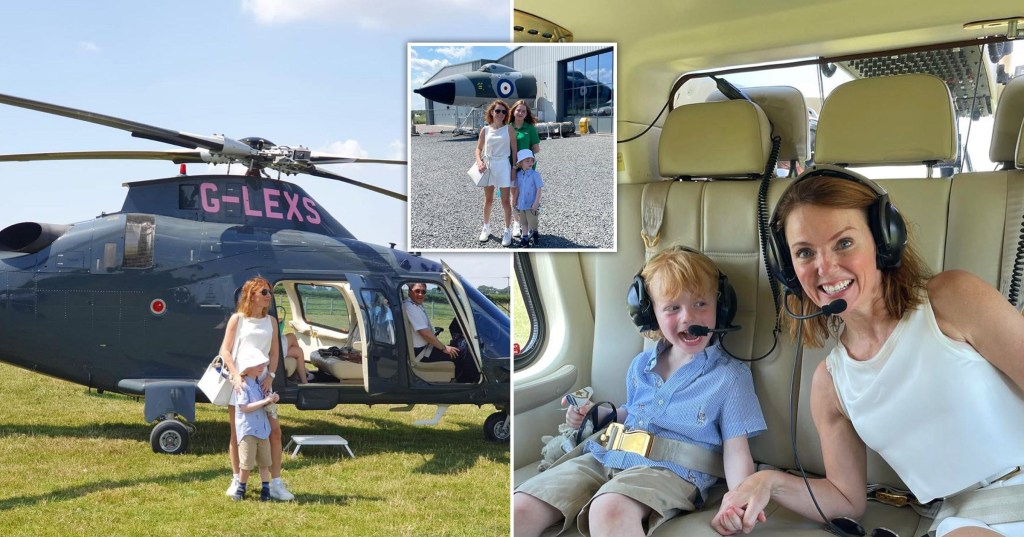 Geri Horner and her children enjoyed a fun day out (Picture: Instagram/therealgerihalliwell)

Geri Horner and her kids made the most of the glorious weather by observing it from the skies as they went on a helicopter ride.

The Spice Girls star, 48, revealed that she and daughter Bluebell, 15, and son Monty, four, would be ‘going on an adventure’ as they sat in a helicopter and fitted their headsets.

The group had been to visit the Jet Age Museum in Gloucestershire where they learned about the evolution of flying.

Geri also shared a clip of them looking down as they flew over fields, houses and even a motorway on their travels.

Sharing a series of black and white photos of women working on aeroplanes, Geri added: ‘We discover women are very much part of the journey of aviation’s development’.

Geri also posed with Monty in front of the chopper they were about to fly in, as well as outside the museum with Bluebell, who looks to already be taller than her mum.

The family’s chilled out outing comes just after Geri and the rest of the Spice Girls celebrated 25 years of their first single Wannabe being released.

The track that shot Geri, Mel C, Mel B, Victoria Beckham and Emma Bunton to fame celebrated the epic milestone on July 8.

Geri and her kids learned about the history of air travel (Picture: Instagram/therealgerihalliwell)

Marking the occasion, Geri shared some throwback photos, adding: ‘25 years of ‘Wannabe’. Wow. The song that changed the lives of five girls from Britain.

‘The first picture was taken in my back garden on a Sunday – we were all listening to the radio together that day we went to number 3 in the charts!! The black and white picture was from our first ever photoshoot!

‘And the famous ring… I bought a gold ring for each of the girls when we first got together, as a symbol of our friendship. It’s a special bond that continues to stand the test of time.

‘I’m so proud of everything we have achieved together, girls. BIG thank you to our amazing fans from all over the world for your support and loyalty. Love, Ginger.’

London: Which nightclubs are opening and what are the rules?

Cubs trying to stay in the moment amid uncertain second half