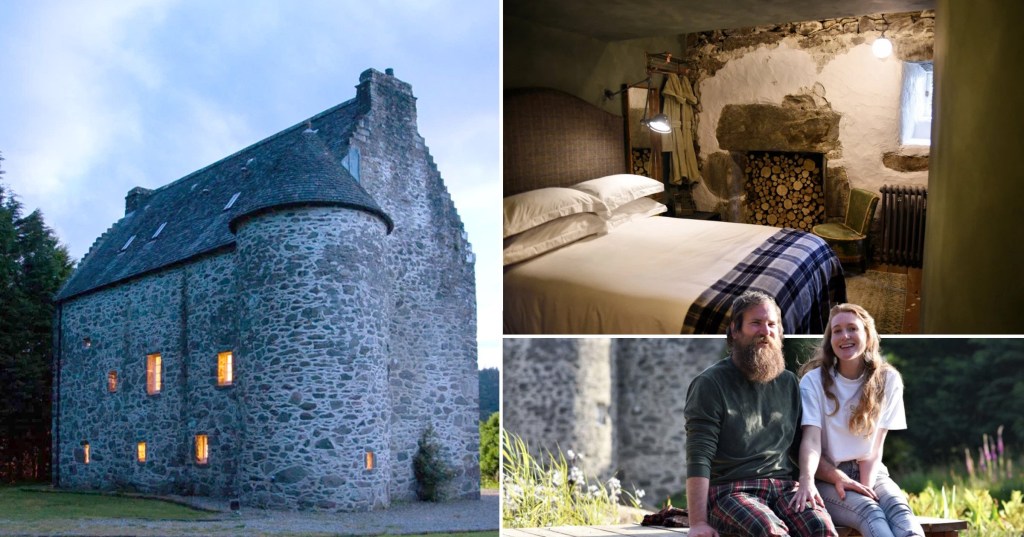 Kilmartin Castle was built when Mary Queen of Scots was on the throne, and now it’s fit for royalty again (Picture: Alan Amper/ Bill Baillie/ Metro.co.uk)

The pluckiest renovator might baulk at the thought of taking on a dilapidated 16th-century Scottish castle.

For novice DIY-ers Stef Burgon and Simon Hunt – who say they egged each other on with the hare-brained scheme – their 2019 restoration of Kilmartin Castle, a turreted, fairytale-worthy Z-plan tower house overlooking ancient Kilmartin Glen in Argyll, on Scotland’s west coast, was a petrifying process, well beyond what they had bargained for.

‘Talk about being out of your comfort zone,’ laughs Simon, from the castle’s kitchen fireplace window seat he recently built.

‘It has been a terrifying adventure both physically and financially, taking a long time to find people we can trust to work with, and dealing with the fact everything always runs over when it comes to time and money.

‘Throwing Covid into the mix has been tough. We’ve experienced a lot of worry and anxiety.’

Today, with all the finishing touches to the castle made, it’s hard to imagine the wild thrill ride that has brought them to this moment.

Near Lochgilphead, about 30 miles from Oban, Kilmartin Castle serves as both an immaculately revamped historic home and new Scottish staycation hot spot, with updated plumbing and heating systems and a watertight roof, as well as five snug yet stylish bedrooms, with their own copper bathtubs, wood-burning stoves and hand-painted antique furniture.

Much of the coaxing of the castle into the 21st century was done by Stef and Simon themselves: despite not having any DIY skills to start, they are now proficient wielders of heavy-duty machinery and power tools, comfortable knocking through walls and designing room layouts, and are expert furniture upcyclers.

So how did the couple, who before buying the castle both had heady media jobs in Dubai, find themselves the new custodians of Kilmartin Castle?

‘Stef presented Dubai’s biggest breakfast radio show and I was a creative director for an experiential ad agency,’ Australia-born Simon says. ‘But we were completely uninspired with our daily grind.’

Hundreds race back to UK from holidays to escape quarantine

A winter road trip exploring Scotland’s dramatic west coast in 2014 was the kick-off point. ‘It felt like the food our souls desperately needed,’ Stef, originally from Newcastle in New South Wales, says.

‘On our return to Dubai, we realised how much we missed the scenery, and wondered if this was that big life change we …read more

Pandemic is not over ‘but it’s time to lift lockdown’, Boris says

Anthony Rizzo searching for answers as midseason funk rolls on

Does having OCD put you at a higher risk of drug addiction?