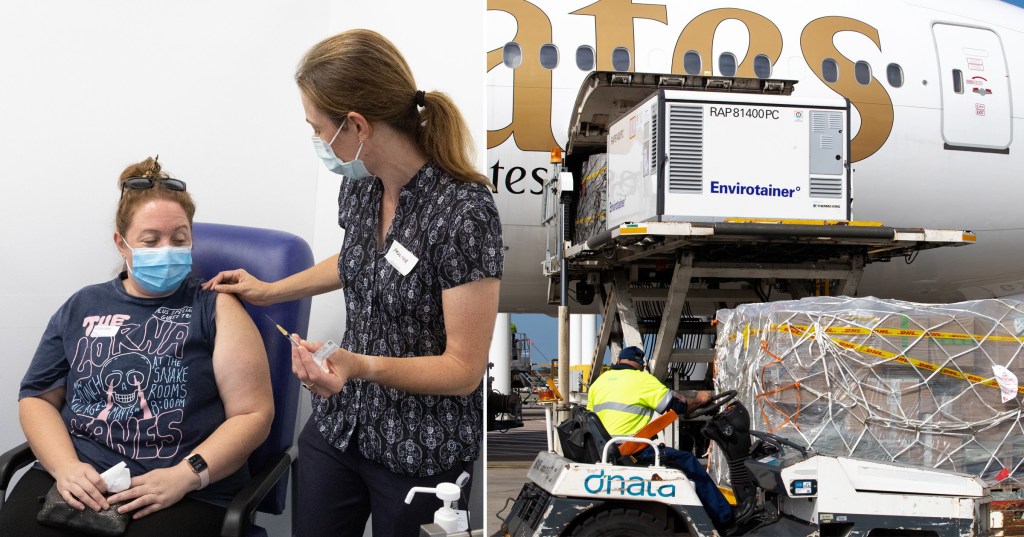 Matt Hancock has said the shipments had nothing to do with the UK Government (Picture: EPA/AFP)

More than 700,000 doses of the Oxford/AstraZeneca jab have been sent to Australia, despite a shortage in the UK.

Details of the shipments were kept quiet to avoid any controversy, according to the Sydney Morning Herald and The Age.

It comes as Britain’s vaccine rollout is at risk of slowing down due to supply chain issues, while both the UK and Australia are embroiled in rows with the EU over export controls.

As the bloc scrambles to make up for its sluggish rollout, Brussels has blocked shipments of 3.1million doses of the AstraZeneca vaccine to Australia, according to Government sources in Sydney.

A planned delivery to Australia of 250,000 doses made in Italy was blocked in March by the Italian authorities.

While the bloc have stopped just short of an official export ban, it agreed late last month to tighten the criteria to send vaccines overseas.

The European Commission said pharmaceutical companies’ requests to send shipments overseas would be assessed on a case-by-case basis.

Countries with more successful vaccine rollouts, including the UK, are expected to lose out as a result.

However the Commission said that out of 491 applications, only one has been blocked.

It added that the EU had also received fewer doses than expected from AstraZeneca.

Commission spokesman Eric Mamer said: ‘This is a global issue, it is definitely not simply a bilateral issue between one country and the European Union.’

The Sydney Morning Herald reported that 17,000 UK-made doses have been flown in to help Scott Morrison’s government’s vaccination programme.

A shipment of Oxford vaccines is unloaded from at Sydney International Airport on February 28 (Picture; EPA)

On February 28 the first 300,000 doses landed at Sydney Airport – one month after the EU adopted vaccine curbs. It is thought a larger delivery was made on an Emirates passenger plane in March.

UK Health Secretary Matt Hancock did not dispute the reports, but he told Sky’ News: ‘We have made sure that we can get the jabs that we need here and that’s why we have the fastest rollout.

‘In terms of what the companies do, these companies are manufacturing for all around the world and we source from everywhere in the world, so what I’m in control of, what matters for us as the UK Government, is making sure that we get the supplies that we have got contracted from the companies.’

Hancock said the British Government itself and that he is only responsible for contacts for the delivery by pharmaceutical companies to the UK to use in the NHS.

Is Jodie Whittaker leaving Doctor Who?