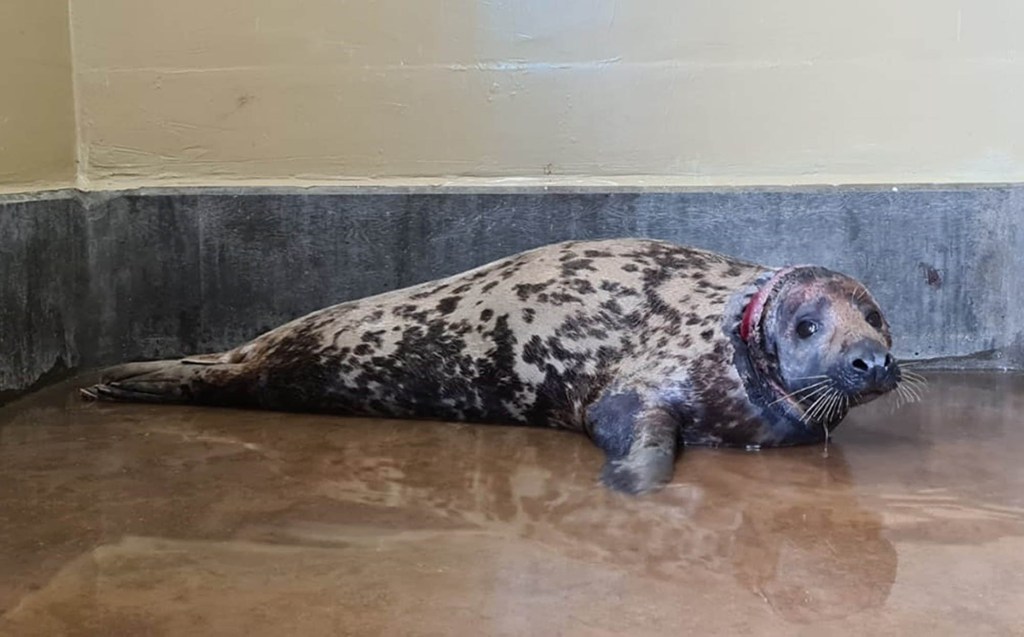 She is known as Mrs Vicar due to the white plastic disc that was stuck around her neck (Picture: PA)

A seal known as Mrs Vicar due to the white plastic disc that was stuck around her neck has finally been rescued.

The adult grey seal was first spotted off the Norfolk coast around two and a half years ago – but the disc has started cutting into her neck as she grows bigger.

A vet cut the disc off on Sunday at the RSPCA’s East Winch Wildlife Centre near King’s Lynn, where staff are now looking after her.

She has a 7cm deep wound which has become infected.

Alison Charles, manager at RSPCA East Winch, said yesterday: ‘Sadly, we know the seal had the ring around her neck for over two years!

‘I’m so grateful she’s now been rescued and we can care for her.

‘She is very quiet this morning and her wound is very sore with a bad smell but we are hopeful she will recover.

‘We can start giving her the salty baths she needs to help her neck wound recover soon.

The adult grey seal was first spotted off the Norfolk coast around two and a half years ago (Picture: PA)
The volunteers who rescued her believe the seal got into difficulty with a component used in large scale pipework (Picture: PA)

‘We add two 25kg bags of salt to each bath and she has one bath a day until her neck has begun to granulate.

‘This is the healing process when you cannot debride (remove damaged tissue) and stitch a wound.

‘It’s so infuriating knowing that this injury could have been prevented.

‘All we can do now is hope that Mrs Vicar is strong enough to pull through.

‘Even if she makes it through the next few days, we are not out of the woods, and we will be treating her for a number of months.’

Mrs Vicar has been injected with antibiotics and pain relief and allowed to rest.

It is hoped Mrs Vicar will eventually be able to return to the sea once she has recovered (Picture: PA)
She has been injected with antibiotics and pain relief and allowed to rest (Picture: PA)

The volunteers who rescued her believe the seal got into difficulty with a component used in large scale pipework.

Peter Ansell, chairperson of the Friends of Horsey Seals volunteer group, said: ‘Mrs Vicar was so called by us due to the prominent white plastic collar around her neck, which has turned out to be some type of flange possibly used in large scale pipework.

‘This poor animal has had this flange slowly biting deeper into her neck as she grew bigger, finally inflicting a deep and bloody wound around the entire circumference, but we are delighted to have been able to now leave her with the brilliant and dedicated team at East Winch Wildlife Centre, where she will receive first class treatment, and ultimately be returned to the sea.’

Still no clarity on whether foreign holidays can resume from May